I'm back in Hong Kong for the Teaching Assistant job that I'm lucky to have gotten again.

I'm staying in Kennedy Town, again. Similar situation with a small studio; a little cheerier this time because less subterranean. Still not a place I'll work or spend too much time. But that's fine!

I've already sallied forth into fooding, which feels terrific and right to have done and also was really fun doing -- I've been excited about the fooding on this trip for months. Really, since the last one! I walked out and went to a place that looked terrific, had no English on its signage, and indeed--I discovered--has been commended multiply by multiple organizations for I-know-not-what, because these "commendations" are not like food critic or food mag things. They're certifications from youth organizations, "commendations" of gratitude, but they don't seem to be for donations...anyway. I cannot, once again, tell you the name of this place because even the English menu had it's name in Cantonese, and while there was an English menu (sort of) there wasn't a lot of English spoken. It is on Davis Street, just south of Belcher's Street, and here's a pic of its sign from Google maps. 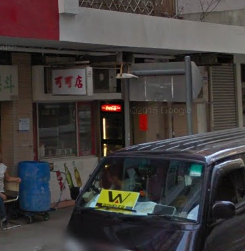 If this were a movie we'd say "enhance. enhance." and bring the sign into focus and also there'd be someone on the team who speaks Cantonese obviously and the whole thing would be easier. Anyway that's the place.

They sat me at a circular table with a bunch of other people. The guy to my left was a heavyset dude jamming away on his phone the whole time. The two guys to my right were kind of rangy, gangly grad-student looking types, and the tone and timbre of their interaction struck me for its similarity to that familiar type, as well: they weren't boisterous or joisting, and they seemed to be kind of hashing out some conceptual thing in a friendly way.

I don't know what the f*$k I'm talking about, obviously; it's fun to travel where you don't know the language at all.

At one point, one of the I've-decided grad students had an interaction with the waitress who spoke a little English and she ducked close to my shoulder and said, "he sees you, and now he wants that," or...I wish I remember exactly what she said but it was close to that, the point I think being "He says the dish that you've ordered in front of you, and it looks good to him, and he wants it!" It was a nice moment. I looked at the guys and said "good choice!" and we laughed even though I'm pretty sure they didn't understand me.

For 103 HKD (including a small charge for 2 takeaway containers, which I'm tempted to side-eye but actually that's just because I'm not familiar with it: those things cost money!) I had 4 dishes, got very full, and have enough left over for another solid meal. That's about $13 US. Which brings me to the taste arbitrage part of this. Basically, I feel very powerful and happy in situations like this because there is a mismatch between the external manifestations of the market's attempts to satisfy my perceived desires and what those desires actually are, the result being that I feel like I'm making out like a bandit the whole time.

I wrote about this last year, as well, I think? In Kennedy Town, there are lots of kinds of swish, chic places; there is also a strong overlap / correlation between a place being swish / chic and being at least partially pitched towards ex-pats / Caucasians / English speakers. So there are all these places with glass walls and high-ceilings that are bustling with a mostly white crowd, where my $13 gets me a beer, pretty much.

And then there are these scrappy dingy places with low plastic stools and steam-billowing kitchens not really separated from the seating area, where they're totally happy to serve me but a bit bemused by my presence (reliably, there will be a double-checking that I in fact meant to order the thing that I've ordered; tonight it was about the "preserved duck egg" and the "black fungus" (both great). These places are hella cheap.

So I feel a kind of market power in these situations, rightly or not, because I'm walking around with a utility function which can be satiated so cheaply, and by different (much less expensive! much more delicious!) things than at least some market actors would predict for my demographic profile.

So the other thing that struck me tonight was the odd, but mostly nice, deference I get treated with here. There's certainly caution and distance in this, which I was struck by last time I was here as well: Hong Kong is a hugely cosmopolitan city (more on that in a moment), but in my very limited experience it seems like the "stuff white people like" tropes of sallying into restaurants where no one speaks English, etc., is a long way away from being the cliché it is to me as an urban American, and still novel.

So but anyway: how I get treated: deference, tinged with caution and distance. I misnavigated (I think) a grocery store tonight: I went in the turnstile, and couldn't get out, and couldn't find any exit so I went through an aisle and the cashier thought I might buy something, but I had nothing (except a bag that could've been full of shoplifted food, I suppose), and I said, "next time!" and she was just very nice about the whole thing. That's an atomized example that I've described poorly; the point is a general distance tempered with polite deference or solicitousness -- that's how I'm used to being treated here. And my post 24-hour travel day, just sounding off idk-wtf take on that is 3 factors:

(1) A common, universal tendency to be particularly polite and open to people who are clearly foreign, whom you have a language barrier with. People take me under their wing here--the waitress who speaks a little English--and it's not like all huggy but they kind of look out for the traveler. That's very nice I'm very comfortable with it.

(2) A common, universal tendency to just sort of notice and engage in a more direct way with people who physically stand out. I feel my physical presence very differently here, and part of that I think is my change in relative size and the fact that I'm a conspicuously white-dude white dude with blond hair and blue eyes. This may scan as a weird thing to observe, and wow: I could be totally wrong! I've never walked around Hong Kong as a brown-haired 5'5" guy. I imagine it would be similar in many ways. But it feels to me like some part of my experience is magnified by my appearance.

(3) Colonialism / White Privilege? This is the weirdest one to think about, and obviously the one I'm least comfortable with. I'm also uncomfortable ascribing any motivations to any individual I've acted interacted with, in this way; it's my observation about the summation of interactions that could be totally wrong. How it works for me is this: in cases where I am not sure what the script is, because I don't speak the language and don't know what is going on, I am assisted to a version of "what is going on" that follows the script of my being a person who is welcome and a person who is to be served with courtesy and care (if: some distance), and I can't help but wonder, again, just how I would scan differently if I looked or were different. Again, I really can't say enough--even anonymously, to no one, writing this--that it's not my thought to ascribe all the courtesy I get to sinister historical power structures; I'd never say that about people thoughtfully navigating my presence as a foreigner. But I also feel like I'd be punking a little if I didn't at least acknowledge the possibility that I have it easy because there is a familiar script that involves serving people who look like me, well. I don't know.

I feel bad ending on the sinister one. My main feeling on this first night in Hong Kong is happiness. It's 1:17am, and I feel that tight tiredness behind the eyes mixed with...not enough exhaustion. I hope I can fall asleep. The feeling is joy to be here. I think I love this place; it's a collision of people and forces and things and I just felt immediately happy, even on the bus from the airport.

It's raining. I didn't pack for the rain.

Okay that's it for this one.
Posted by slimbuttons at 11:19 AM