The Ballad of Axle: Part, the Second

After a couple of days, Axle was behaving like a healthy, happy kitten. She played with her ball, she ate wet food and drank milk (and was insistent about their provision), she very much liked to be petted and to fall asleep on my chest or my lap.


She also, however, clearly had some fleas. I suspected as much, and on her second day in my bathroom i spotted one. So I bought a flea comb to check and brush her out, and yuck yup fleas.
Little kittens are apparently too fragile for the chemicals you’d usually use on cats to kill fleas. What the interwebs instructed me to do, instead, involved this:
The idea is you bathe the kitten in dishwashing soap and then have the Vaseline to hand to dab any fleas who try to escape. This does not kill the eggs – you need the chemicals for that – but does eliminate the hatched fleas and as such makes things nicer, aids in the long-term goal of flea eradication, and of course has all sorts of other salutary effects for the kitten since it is bad for the health to have fleas.
Here’s the video, which is really all you need.
The aftermath was rough: a shaking, shaken kitten whose world took some time to reassemble itself around her. But Axle is nothing if not resilient: after about 30 minutes of gentling and drying she bounced back, and her coat was notably cleaner and softer. It was also, if you're wondering, very effective flea-wise.
Posted by slimbuttons at 6:56 PM No comments:

The Ballad of Axle: Part, the First

Find and Retrieve
My friend S. is anxious about driving. She’s anxious about driving at night, about parking, about spacing out and getting into a fender-bender. So she may have already been feeling a little rise of nervousness as we approached her car last Wednesday – a rise of nervousness even before we heard the frantic meows coming from underneath, beside, inside her car. We couldn’t figure it out: I looked under the car and alongside and we saw nothing, and it eventually became clear that a cat was somehow involved in the undercarriage of her vehicle and was pretty unhappy about things. Then, we saw a piece of paper clipped to the windshield wiper: 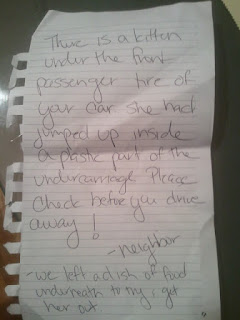 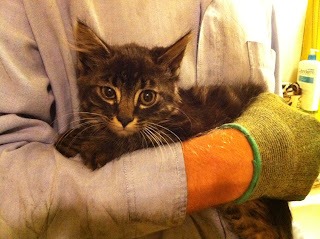 I brought her home, by which point the clock said that it was a bit after 2 a.m. S. and I had approached her car and heard the meowing at around half-past ten. I put the kitten in the bathroom because I have cats from which she had to be quarantined and vice versa, gave her some milk and some food, and sat there as the formerly howling chaos became a very cuddly, very grateful kitten that sat in my lap and fell asleep, purring as loudly as the cars she'd been hiding under hours before.
I named her Axle.
Posted by slimbuttons at 3:05 AM No comments: