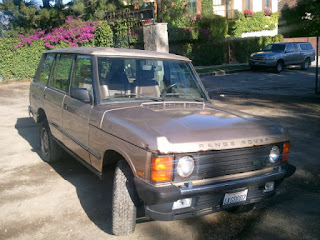 This is Range. You’re pleased to meet her.
I purchased Range for $3300 from my friends. She’s a 1993 Range Rover with a “Long Wheel Base” and a zillion miles on her. The price was going to be $3000, but then some work was required at the last minute so it got raised to $3300. And, within ten days of purchase, she needed to have her high-pressure hose (the one that conducts the power steering fluid from its reservoir) replaced because it was leaking for $220. So let’s put her price at $3520. If you look at the prices on nada.com this is not a great big steal, but it’s a pretty good price.
I suspect the Nada quote is misleading. I would’ve wound up spending more than that, and then more importantly because Range and I are in love. I like how high she sits: the heads of men in sports cars are literally beneath my knees; I’m looking down on them from the mezzanine. I like how Range drives: the shocks aren’t exactly pillowy, she’s loud and feels powerful and sure, particularly up canyon roads and craggy dirt roads, where the 4WD comes in. I want more of that, more offroading and tracks that require all four wheels.
Range has some heft on her, and the whole “just throw stuff in the back, it’ll fit” is practical and amazing. Bikes, scuba gear, furniture. A lot of freedom and flexibility comes with a big car.
Drawbacks as well, yes. Gas mileage: abysmal. Like 15mpg on the highway. Turning radius: very wide. Parallel parking only in large spaces. I see why people say “I wouldn’t want to have a big car” and sometimes I envy the drivers of zippy little whips.
But none of that matters when you find someone you really connect with. Range and I understand each other. She’s rusty and messy and banged up, but fundamentally sound and well-made. No fussiness or worry: dings and bangs and rust and scuff is already written all over her, so nothing cosmetic is going to change the picture. Her color is “Roman Bronze”, and it is great. It is Roman Bronze. She’s screwy: you have to wait for 30 seconds after turning the engine over to put her in drive. Why? I have no idea why, just wait for those little lights to off and you’re good. Rear hatch doesn’t lock. Rear right side window off its track, only goes up and down “manually” (grab window from both sides, muscle it). Sun roof really needs some WD40, which I can never remember to get.
All I need Range to do is run and be her bangaround rough-and-tumble self. She’s no jalopy – she’s Roman Bronze. And she’s a passport to things that are good things; to camping and mountains and biking and rivers. I’ll post any dramatic updates, but until informed otherwise she’s the one for me.
Posted by slimbuttons at 2:28 AM No comments:

Some Thoughts on Wireless

note: "wireless" is a 2-syllable word.

Wireless video:
mistake. But wireless headset?
Worth the extra dough.
Posted by slimbuttons at 2:44 PM No comments:

Supermans I and II and the Virtue of Aesthetic Forms

I almost certainly saw Superman as a kid, but I didn’t really remember it beyond certain iconic scenes and shots I’d seen since (“Who’s got you?!”). I watched it again recently; I enjoyed it a lot. Mostly I was moved and charmed by Reeves and Kidder: it really captured her sense of total wonder at him, which translated into my experiencing the wonder of him. “Superman”! A beautifully nice super man who flies and is so good! Magical, if it actually lands.
I also found the movie silly, maybe inevitably; I buy that Richard Donner deserves credit for making the film more serious and less silly than it might’ve otherwise been (and thereby clearing the way for Singer, Nolan, &.) but it still reads to me, now, as a bit goofy and campy.
I happily continued on, however, and watched Superman II, forgetting about the fact that there are different versions: one by Richard Donner and one by Richard Lester, the latter being the theatrical release after some Hollywood creative differences stuff between Donner and the films’ producers, the Salkinds. So I stumbled into the Lester version, and I was totally appalled. It’s a slapstick trivial mess, tonally very different from the first film and much less successful. The magic of the relationship between Lois and Superman, which really has elements of myth about it in the first movie (flaws and all), is brought down to a telenovela level of interest and complexity. Any rules about Superman’s abilities go out the window: he can just do anything (e.g., project giant red energy net “Superman S”s from his chest). All the corny gagsy bits with the pedestrians in the street, muttering funny things during the super-fights and losing hair pieces. It’s awful; upsetting and awful.
I sorted out the version thing and re-watched the Donner version, kind of suspecting that I might be overdoing this and wasting my time. I also watched the bonus features, which include an interview in which he tears up a little when he talks about being taken off the films, and about what might have been: how Lois and Superman’s relationship could have grown, in particular. Watching his version, I found that I was almost immediately captured by the same sense of lost history. The Donner cut of Superman II is a stronger movie than Superman. It integrates with the first narratively and stylistically in a deeply satisfying way – which is to be expected, since they were made as an integrated pair. Most of all, it builds on and enriches the Lois and Superman connection. This is due, again, in no small part to how just awesome both Reeves and Kidder are; the scene where she shoots him was the screen test, and they’re still both awesome. Its quality is mostly in the overall construction and tone of the film, though. By engaging me in those characters and that relationship, the film drew me into its wonder and epic-ness and I gave me a world that looks mostly like my own with a few notable exceptions. It’s a place that I, like Donner, am sorry I didn’t get to go back to more.
I’m choosing to write about this Lester/Donner version thing because I see it in terms of a problem of large commercial feature films gone wrong, which is in turn a facet of many failed creative efforts: a sense of not-thingness, of being just the aggregation of a bunch of creative workstreams, incentives, and market demands rather than the product of a vision. In addition to the fact that I personally found many of the elements of the Lester version annoying, the whole thing simply failed because those elements didn’t fit together to create an integrated whole. They were overlaid on Donner’s foundation, and none of it sat together at all. I don’t think this is a necessity of commercial film, by any means: Pixar makes movies that are very coherent and vision-y. I thought a nice thing about Avatar was how it also avoided this; say what you like about the script or facile political commentary, Avatar definitely has thing-ness: it’s the product of a unified and coherent vision and fits together as such.
When you sufficiently degrade the thing-ness of a thing, it becomes an insult to its category. I’m thinking of books now, particularly business books. Many of the books I had to read in business school were not really books; I don’t mean the textbooks, of course, or essay collections, which were naturally compendia and meant to be such.  I mean things that were supposed to be “books” in the sense that we generally conventionally mean it: long-form prose with an aesthetic, logical or narrative through-line. Things that are together with themselves. Even crazy books, books that are formally nuts, have this: Naked Lunch has it.
This is not to say that these non-book books contained no good content; being smart or elevated or “good” is not the essential quality that makes a book book. But piecemeal things put together with absolutely no regard for form are in important ways not “works”. I think that’s the key: with absolutely no regard for form. This may stem in part from biases I developed in grad school, but a total alienation from the integrity of aesthetic form seems to be to blame for a lot of aesthetic clanginess.
That’s all I’ve got on this. I think the upshot is to really be sure you get the Donner version if you ever watch or rewatch Superman II.
Posted by slimbuttons at 6:20 PM No comments: