How Long It Actually Takes To...

cross my apartment, put on my shoes, walk downstairs to my building's laundry room, clean the filter in the drier on the load I just dried, fold that load of laundry, walk back to my apartment carrying it, take off my shoes, and lay it down on the bed: 09:56.25

n.b.: this does not include the sorting and putting away of the laundry; to wit

Three Things That Happened This Week at the Beach

I've been swimming most days, which is of course amazing.

Walking down the boardwalk towards the surf, a little boy's eyes snagged on me--this happens a lot because I'm in my wetsuit, and little kids are struck by, I think, either the novelty, or the engaging assumption that I'm a surfer. They often say something; this kid didn't but did the whole zoogly eyes thing.

Then, when we were three feet past each other he said, "What's your name?" As if he might recognize me, or know it.

I told him my name.

"My name's Lucas!" He said it like that, exclamated.

"What's up, Lucas?" I said. "Here." And I stepped towards him and raised my hand for a high five.

He zipped towards me, did an odd motion, and jumped for the high five and it was good. Then Lucas said, "I've got this new method," and showed me this complicated martial arts-y thing where you kind of cock your fist up, lever it, THEN do a fist bump. Like loading up then firing the fist bump. And then the splooosh thing afterwards, hands wide. He said that, showing me: "Sploosh."

So we did that, and I said, "Thanks a lot, Lucas." And he smiled and said, "Okay," walking back from the beach as I continued out towards it.

Coming out of the water after a nice, long swim, a boy--not quite a little boy, maybe 12 or 13, long lanky California kid hair--bounded up to me. He had a rash guard on, and a boogieboard.

"You were swimming with dolphins."

I smiled more. I'd certainly seen no dolphins; I wasn't sure there had been any, or that I'd really been anywhere near them. "That's amazing," I said. "I didn't see them. I wonder if they saw they me."

"Yeah," he said, nodding. "Yeah. I wonder what would have happened."

There's been a swell with 4-, 5-foot waves even close to the Santa Monica Pier. And it's been hot. So there've been a lot of families at the beach, boogie-boarding and bodysurfing.

As I walked down into the water yesterday, fussing with my swim cap, two little girls rode the foam of a big crash, practically all the way up to the towels.

They were probably nine, ten; wearing those little-girl bikinis that're like two bandannas wrapped around a banana.

They held each others' hands, laughing as their boards coasted up in parallel. Their skin was differently hued.

They stood from their ride, scuffling with their boards, excited to go again.

"You have no idea how good that was," one said to the other.

Posted by slimbuttons at 10:01 PM No comments:

LA, West Side: Life is This, Right Now

This morning, I took a 6am class at a nice local yoga studio that I've mentioned before on this blog. The teacher of this class is a guy whom I like, as a teacher and a dude, the latter in large part because he strikes me as proactive and entrepreneurial about the hard work of marketing yourself as a yoga instructor in LA.

Class was done at 7, which means--this time of year-- that the sun's coming up as you get out. So, I took this picture.


Then, as I sometimes do, I turned the camera on myself. I like to selfie when I'm in pretty places/settings that make me happy, because it all kind of seems like a gift and who knows when the next gift will come, so I like to remember it. I'll include that shot for completeness' sake.

As I'm doing this, Ryan--the teacher--comes out. Asks if he can take a shot of me taking a selfie, and I sort of know what he's up to: Ryan sends lots of emails promoting his classes (which, again, I respect), and it sounds fun. So I say yes and he's doing all these posing suggestions as I try to recreate my selfie-moment; he sounds like he's giving a yoga class: "lift that arm a bit more," "crook the elbow."

The result is the shot below. which to me feels fun and silly and apotheotic to...I dunno, life, right now. In a waggish tongue-in-cheek way, but also true.

Anyway that's what happened, to me, around 7:10am Pacific. 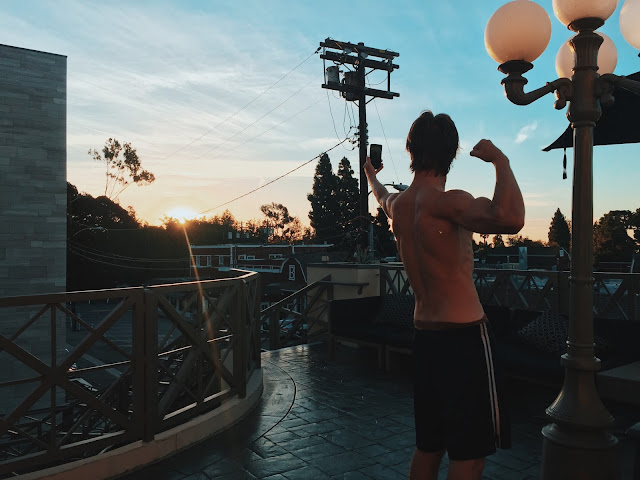 Posted by slimbuttons at 12:46 AM No comments: