My godfather bought me a beautiful, pretty fancy pen for Christmas. It was a generous and thoughtful gift with a personal narrative behind it; I feel lucky to have it and will take really good care of it. It’s also been an occasion to review changes in writing technology.

The pen sat in my apartment for a few days; it felt weird carrying around something that valuable and small and easily lost. But it was a gift for use, and so a few weeks ago I sat down with it in the study lounge at Chicago Booth, a lovely room with big windows and a big fireplace. I was in some kind of hurry but had set aside a chunk of time to do things unrelated to the pen, which was good, because it took about 45 minutes to figure the pen out. It didn’t come with instructions, really, just a general set of vague directives that didn’t seem to be for my specific model lodged with the pen in its fancy case. It also had a variety of fragile-looking pieces and mechanisms. A few minutes of research acquainted me with the energetic community of fountain pen lovers out there, and I figured out what model of pen I had been given and what type of fountain pen that model was: a convertible bottle/cartridge system, with two different little apparatuses that you swap out for each other depending on whether you want to use a cartridge (ink in the pen) or bottle (dipping the nub in ink). Eventually I found these instructions on how to do the swapping and load a cartridge pen, although the final step – getting the “pin inside the section block” to “puncture the seal of the cartridge” – was iffy: I wasn’t sure if I was pushing the right end of the cartridge into the right bit of the pen cartridge-holder thing and didn’t want to break either. But after a few minutes of ginger pushing, the pin broke through the seal and I was writing.

It was different than a ball-point. It was certainly heftier in my hand, and – I imagine simply because I knew it was a nice pen – felt better balanced than those fake nice pens. The feel of the nub was scratchier than a ballpoint, and it made a big difference what angle I held the pen at and how I held it rotationally (meaning which part of the nub touched the page), the first for volume of ink flow to the tip and the second for the nature and amount of ink flow from the tip to the paper, which could be varied (for any given pen angle) from a scratchy line to a full, swelling little river of ink.

Ink, in general, was a big issue. I wasn’t supposed to store the pen upside down or else ink would seep out and make a big mess. I wasn’t supposed to leave the tip exposed for too long or it would dry up. So for the next week of note-taking I would sit, with this pen at the ready but sealed up, and when I wanted to jot something down I would unscrew it, tip it over gingerly to make sure ink would flow correctly, carefully scratch out what I had to write – not allowing the tip to rest too long in any one place or else ink would pool up – and then cap the pen, clipping it nub-up against my shirt or collar or whatever to assure that the ink stayed down. Even so, the ink got everywhere; it covered much of the shaft of the pen (the part that gets covered by the cap; that may not be the right term for it) and by the end of a class of note-taking my hands looked like this: 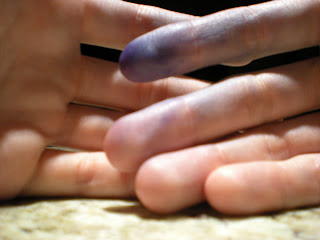 In an honestly unrelated turn of events – I had been looking for a good digital way to take notes for awhile – I discovered and begin using Microsoft OneNote for class notes around then (it’s a great program, by the way). Immediately, all pens became a much smaller part of my life. But a few days ago I took out the quality pen again; I had to write something down in class, so why not do it right? It was then that I learned that the cartridges dry: unlike a conventional ballpoint, you’re supposed to take the cartridge out of these fancier fountain pens if you’re not going to use them for awhile. Or else it dries out on you entirely.

So what I have is a handsome and tactilely satisfying pen that sets off a localized ink explosion whenever I use it, which had better be often unless I’m willing to swap cartridges in and out or simply resort to carrying around a small bottle of ink for dipping (which I’ve not tried yet, and which I suspect may indeed be the highest use for this type of thing). I was curious about how much more I was supposed to enjoy or benefit from this experience than the run-of-the-mill pen experience. Going from a discounted price for my pen against the per pen price of a Bic round stic ball pint, it seems like my fancy pen is supposed to provide about 2,500 times as much writing utility as a conventional Bic.

It’s hard not to marvel at how much better we’ve gotten at making things. I don’t mean to belittle this wonderful gift; I value it personally, but also as an elegant artifact of engineering and what the impulse towards quality used to mean. I like using it (when there's time), though not necessarily for the right reasons. I’m sure there are also benefits to this kind of tool: you can’t idly sit with the pen on the paper; you have to formulate a thought and write it out and lift. There could also just be some big aesthetic point I’m missing; I often miss those kinds of points. But it also appears to be the case that we can now make, for 1/2500th the price, a pen that is basically infinitely easier to set up, much easier to use, different but not necessarily inferior in line quality, and easier to maintain than this one. That’s very cool.
Posted by slimbuttons at 8:59 AM No comments: