I sold Range yesterday for $900. It was sad; I had a final rush of longing as I saw her chained and hoisted up onto the flatbed tow truck to take her away. But, it was time to go.
When I first wrote about Range, I said I just wanted her to run. So yeah the thing is she stopped running. The sequence:
Overheating: looks like I’m out of coolant
Hrm. No way to fill coolant because it keeps on leaking.
Wow, smoking engine. Can’t drive her like this.
Tow to Sherman Oaks Exclusive, a Range Rover specialist with a good reputation (that is well earned, as far as I can tell). Get the bad news: it’s probably either a head gasket or a radiator core. We’re looking at $1500-$4k of repairs. 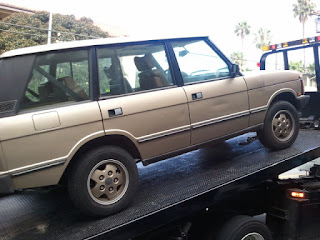 Second opinion confirms this.
Magically, the coolant stops leaking (Sherman Oaks Exclusive flushed the coolant out and that seemed to help). She stops overheating. I entertain the idea that this’ll be Range’s final quirky victory: running for another 30,000 miles with the “Check Engine” light on but running fine.
Overheating again. Cue video at top of this post.
So, within 4 months of buying my first car I sell my first car. It’s hard to sell a semi-operable car, and I almost fall into a couple of traps of selling her for almost nothing, but in the end find a few willing buyers through CL who bid each other up to $900 and that’s what she goes for.
Let’s look at the numbers to put the whole thing in perspective. I bought Range for $3300 on April 2, 2011. I put $250 of work into her in the first ten days, so let's add that to the tab. I sold her on August 10, 2011 for $900. I’ll imagine, then, that I paid $2650 to rent her for that period. That’s a period of about 17 weeks, so $156/week. That compares favorably to the $400 to $700 per week that I get on Orbitz to rent an SUV. So from that perspective, okay. It was a reasonable rental. Plus, I got to fall in love with my first car and acquaint myself with a kind of car – big, comfy, off-road capable, knockaround – that I like. It’s honestly not hard to view it this way and just kind of be like, you know: okay. If ish happens, this isn’t such bad ish.
That said, I now no longer really have the liquidity to buy a car, and there’s another wrinkle I feel I should mention. I bought Range for way too much. This was a thing I discovered rudely when I had to price her for resale. This rankles and is complicated, because I bought her from friends whom I’m pretty sure thought – and still think, probably – that they did me a favor. But, here are 3 commonly used sites’ valuations of a 1993 LWB County Range Rover in better condition than Range when I bought her; I don’t mean better condition anticipating all these problems, I mean even assuming that none of these major issues arose:
Now, in an important way this is all my fault. I should have checked these numbers more carefully before the sale. I certainly should have had an independent mechanic look at the car (as my uncle over and over recommended), which could’ve saved me all this. But it does, well it sucks that someone whom I thought was looking out for me actually sold me a car for more than two times its sale/trade-in value, and 27% over what even a dealer would have sold me the same car for – actually, what a dealer would have charged me for a slightly cleaner/better condition version of the same car. My bad. My bad my bad. But man; it’s so disappointing. And, as I said, all the more so because I’m sure this person still thinks they did me a favor, so I don’t know how or whether to broach this, or even if it’s worth it or what the purpose could be. 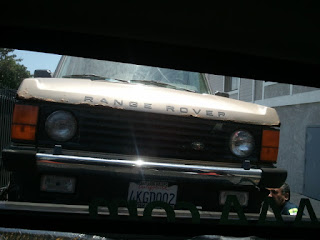 So, anyway. No more Range. Not a big deal – it’s not like anybody got hurt. But boy, did I let myself get burned on this one.
I still love you, Range, for what we could’ve had and so briefly did.
Posted by slimbuttons at 9:06 PM No comments: