Correct. This is still happening.

Here's the last month's progress. I think you'll agree that it represents a net gain. 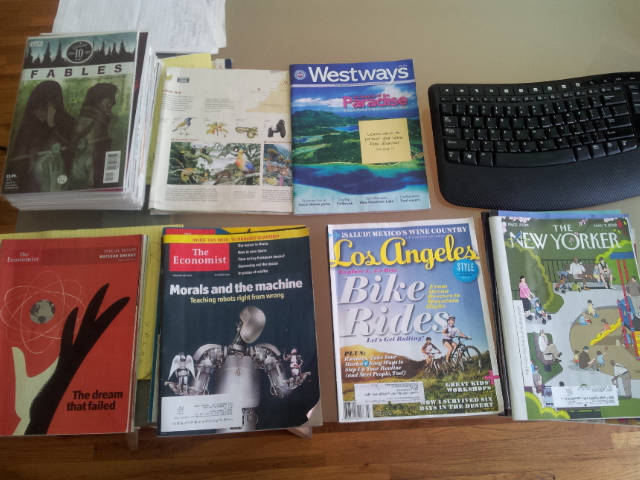 - 4 The New Yorkers
- 3 Los Angeles magazines
- 3 The Economists (not a net gain; I know I know)
- 4 The Economist Special Reports (boom! there isn't even on in every issue)
- 1 Westways (shutup)
- 1 National Geographic map pullout about the East African Rift System and the great lakes therein
- 1 Fables
- 2 Fantastic Four
- 1 B.P.R.D.: Hell on Earth
- 1 Chew
- 1 The Walking Dead
- 15 Elephantmen (the centerpiece of this entry. the "comic books" part of the stack is now essentially slain, with an incidental rump remaining that will be read sometime when I want a trippy mix of weird ish that I did not in fact buy but was sent as package filler or something)
- 4 Uncanny X-Men
- 3 Captain America & Bucky
- 1 Captain America & Hawkeye
- 1 Savage Dragon


Okay! So, as noted, the comic books part of this whole adventure is wrapping up. That's gratifying. We're actually almost to the point where I just have to read fifty-thousand Scientific Americans (and a small handful of National Geographics, but that's very pleasurable - oddly, I've fallen off on those as I'm catching up with The New Yorker: they seem to occupy the same mental space [pleasure; diverting; multi-interest] in my reading brain).

Two things to say here. One is that I just have no idea how much of this I'm freaking retaining. I'm leaning on the fact that - as I am occasionally able to demonstrate when called upon to do so - stuff like The Economist Special Reports does seem to give me some soft contextual framework for understanding a thing (developments in retail banking, for instance), so that even if a lot of it passes through some structures remain. I hope. That's actually all there is to say about that, although it's probably the central thing about the Stack reading, at this point.

The other is about Elephantmen, which is just a strange and ultimately very worthwhile comic book. Observations:
(1) The male gaze is narratively boring. It's just a tedium at this point to have a lot of naked ladies in a comic book with lots of clothed dudes.
(2) There's something racial/othering going on in Elephantmen that is kind of insane and intriguing. Basically, the "Elephantmen" are these genetically altered rhinos, elephants, etc. - i.e, they are African - who were soldiers and are now loose in human society in general. And a big issue is essentially that they are very virile and have big rhino penises and everyone's antsy about them being with human women. And the series goes hell and leather for this, with lots of stuff of nude sylph-y women draped over, like, a muscular rhino with his horn prominent in the image. It is super, super weird but I _think_ it is knowing. It's bizarre.
(3) There is a tremendous amount of narrative care in this series. It over and over shows you scenes from different angles, or drops a snippet into one story thread that integrates into another like three issues later. This level of (a) care and (b) faith in the reader's attention span and retention would be unusual in, say, an upmarket television show or film. I can't actually think of another comic book that does it so consistently or so well.
(4) Given the care, and the general high quality of the writing, there are these weird linguistic lapses where for one line a character will briefly talk as though English is not his/her first language. I assume it's a copy-editing issue.
(5) The sci-fi frame is pretty satisfying, and the ancillary material (stories in the same universe from other creators, etc.) tend to be good.

It's a crazy, adolescent, immature in some ways and mature in others, imaginative and cool series.

Posted by slimbuttons at 2:46 PM No comments: