Here's a drawing I did. 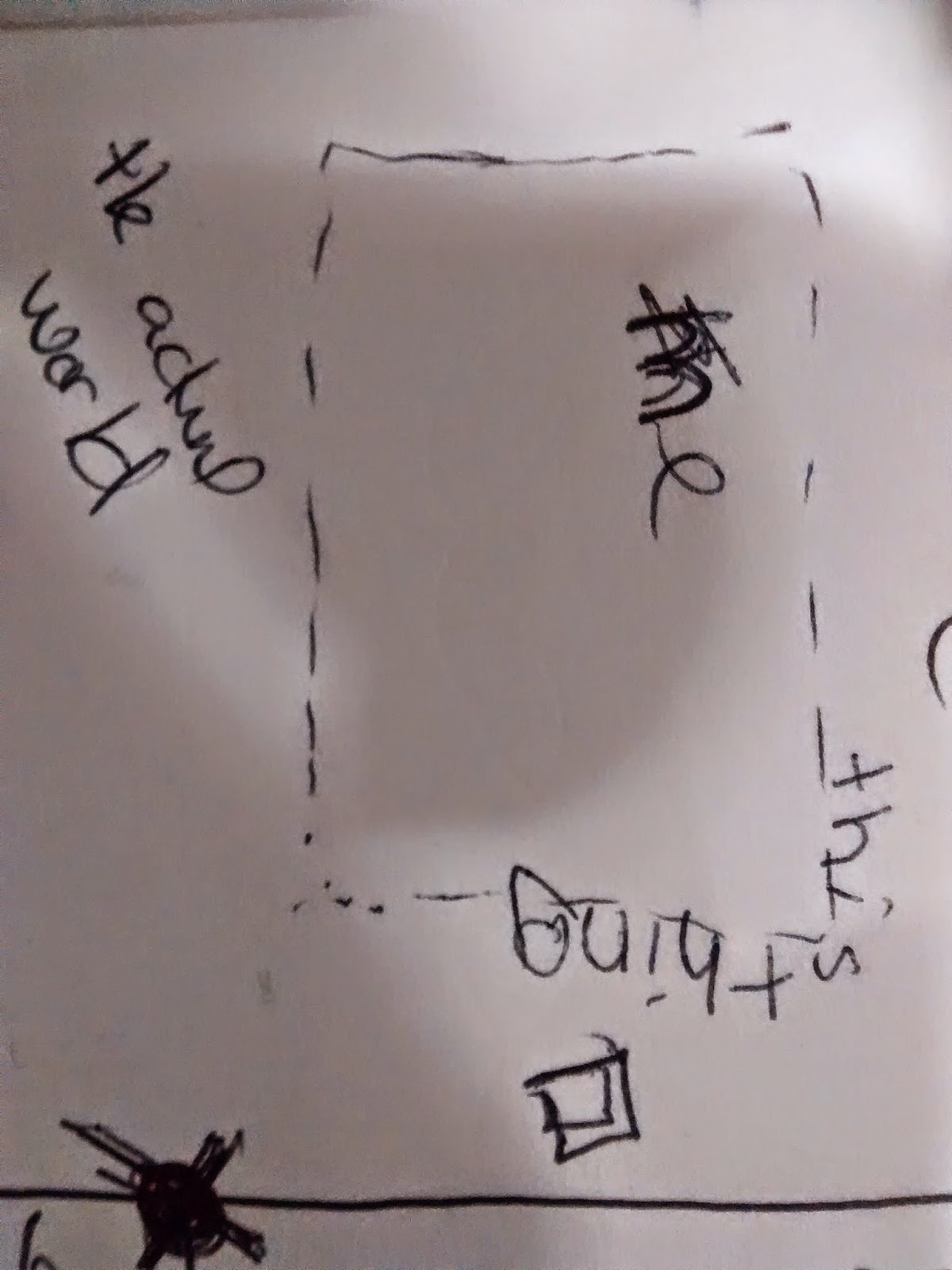 It's a good representation of my visual artistic abilities.

Those words on the left are "the actual world.".

Those words that bend around the dotted rectangle on the lower right are "this thing".

That word in the dotted rectangle is "me".

That box-in-a-box at the bottom isn't important: it's a check-box for me to tick once I've posted this (done!).

I drew this because of a sense of caution, or perhaps if I'm honest mild self-contempt, about this thing that I'm doing right now. How it's supposed to be about a thing that is very much in the world -- in business, in starting new things. And to some extent it is, in that the thinking and frameworks are very valuable. In fact I ought to and want to state that more strongly: the thing (the rectangle box) is of value, and offers something of value to the people (students) who enter into it. Most people would benefit from some time in the box.

BUT, me, in the box, doing the thing -- what's actually happening to ME is that I'm getting good at the rhetoric and frameworks and internal system of this thing: this course, this way of thinking, and all that. And outside that is the actual world. Which is its own, big, different set of circumstances. From which I am shielded.

That's all.
Posted by slimbuttons at 4:09 AM No comments:

I'm in London, for work; I love London, and I love the people I see here. But but being on trips also reminds me of how much I love L.A., and living there, and really want to earn it and feel like I've made something of myself in that place. Like: that I am specific to it.

When you have friends like J-- and B-----, for example, this is what Thanksgiving looks like in L.A. 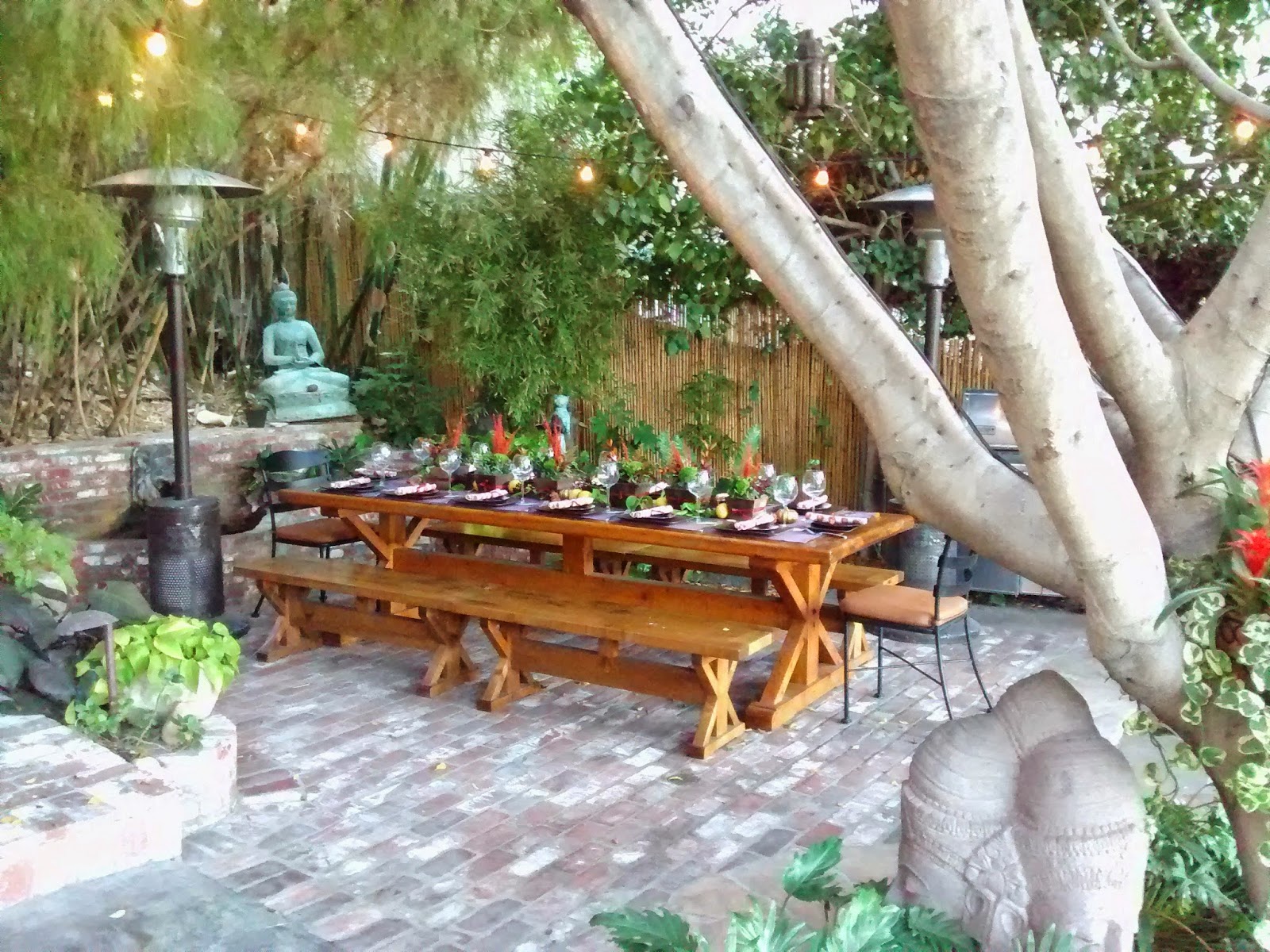 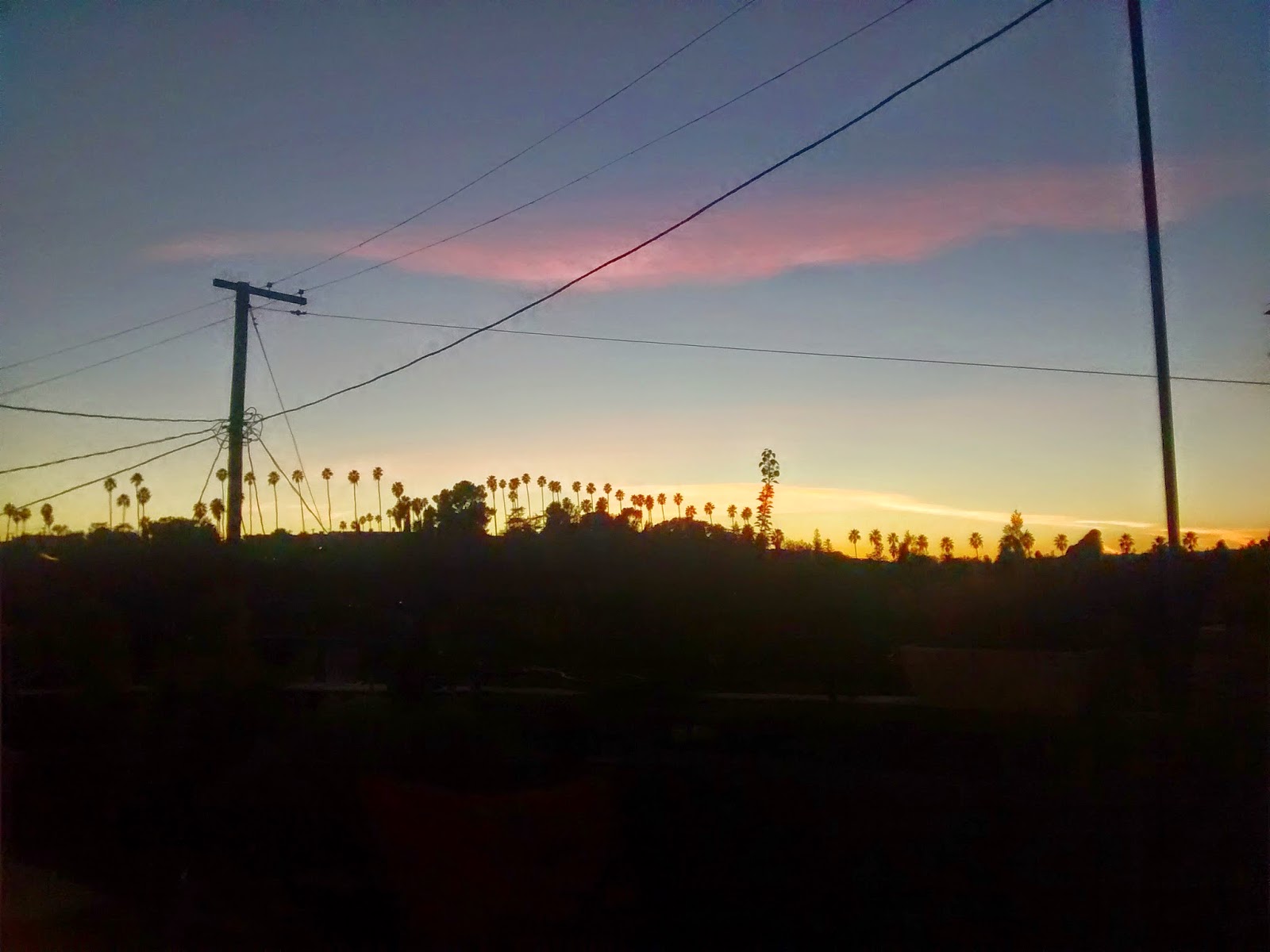 Posted by slimbuttons at 5:37 AM No comments:

I've been going to Singapore periodically for (wow) the last couple of years, for work. But the work thing is relocating (even if they rehire me), so I won't be back there for awhile. Maybe ever. So I tacked an extra day on to this last trip, to visit Pulau Ubin: a small wetland island close to the city itself, that's touted as a way to view what pre-industrialized, pre-hyper-commercialized Singapore was like.

I'm really glad I did. It was pretty weird. What follows is a tourist guide for how to have exactly the same day I did. 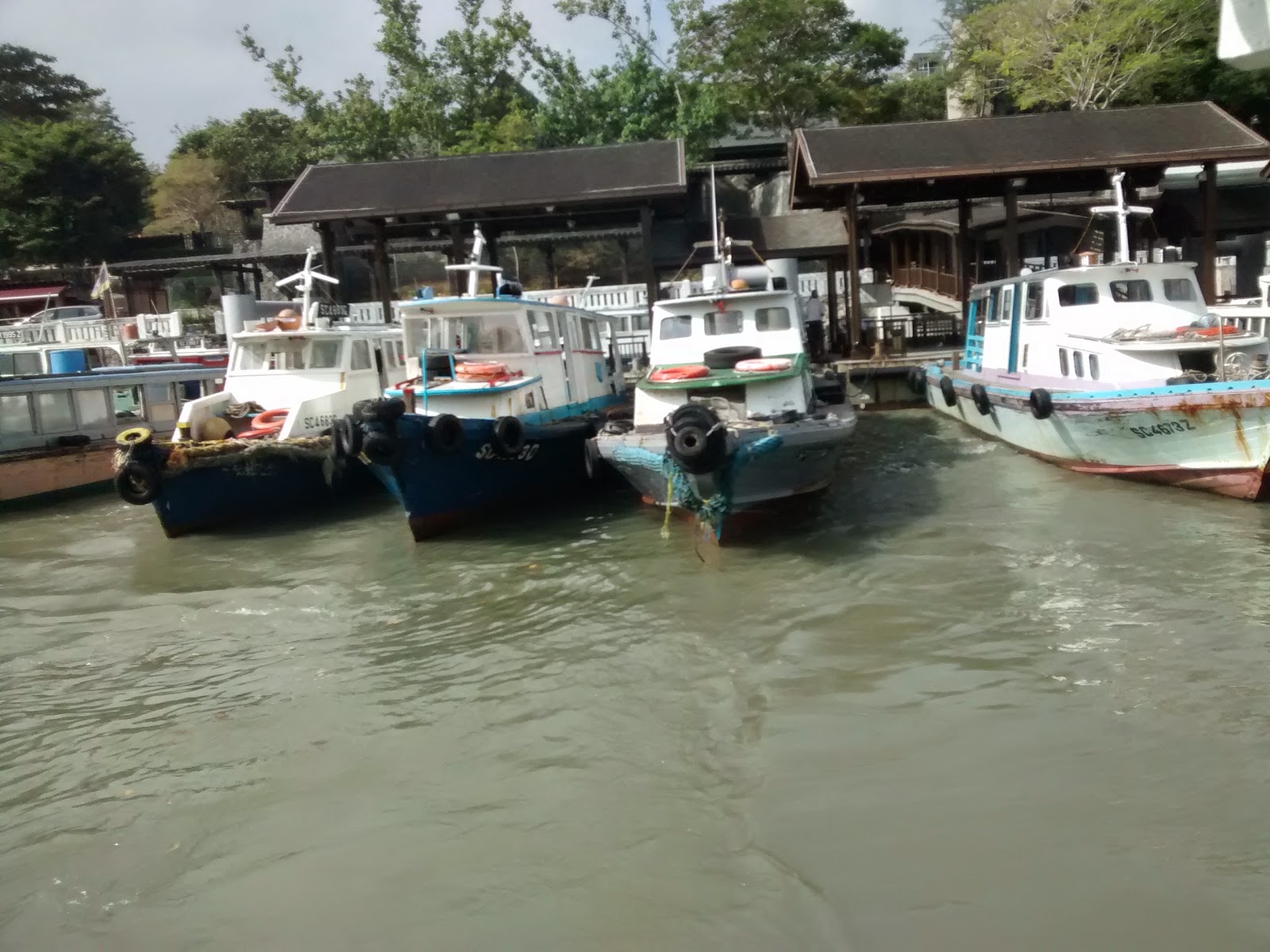 You get to Pulau Ubin by "bumboat", which I have checked several times is actually that word and apparently is. A bumboat is a small boat, as pictured. They hang about the docks in a town near the airport until 12 people are on, and then off they go. The ride takes about 10 minutes, and it's pretty, through small waterways between the mainland and the island. 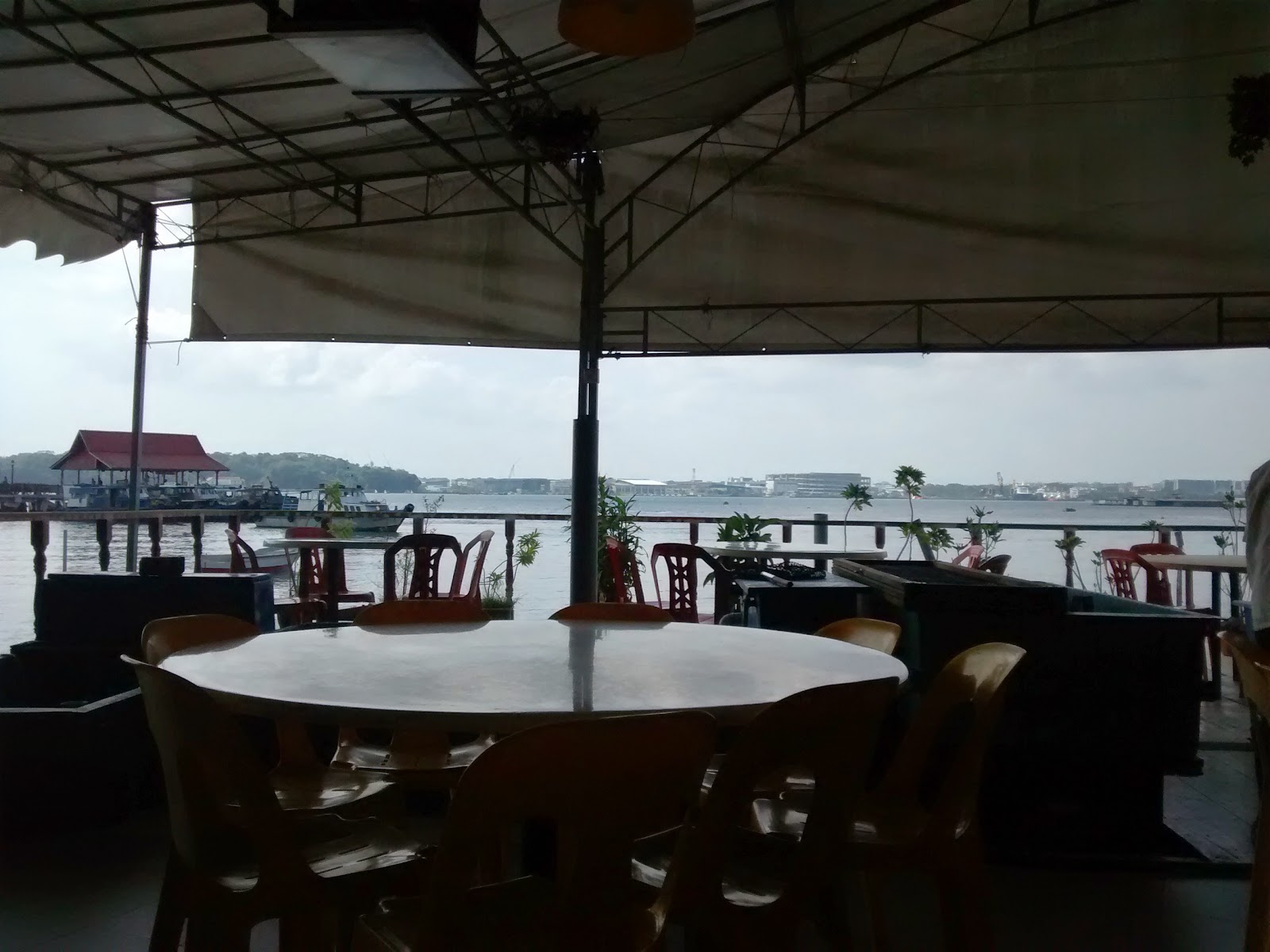 Then you get there, and there are bicycle rental shops and eateries clustered by the small dock. You can, for instance, sit in a nearly empty one (it's a little after 10am) and eat a DELICIOUS oyster omelette, slightly anxious that the oysters will mess you up because you had a conversation with the Dean of the business school the night before, at the graduation dinner, about how badly oysters can screw you up but how you and he have been lucky and have never had a bad one. 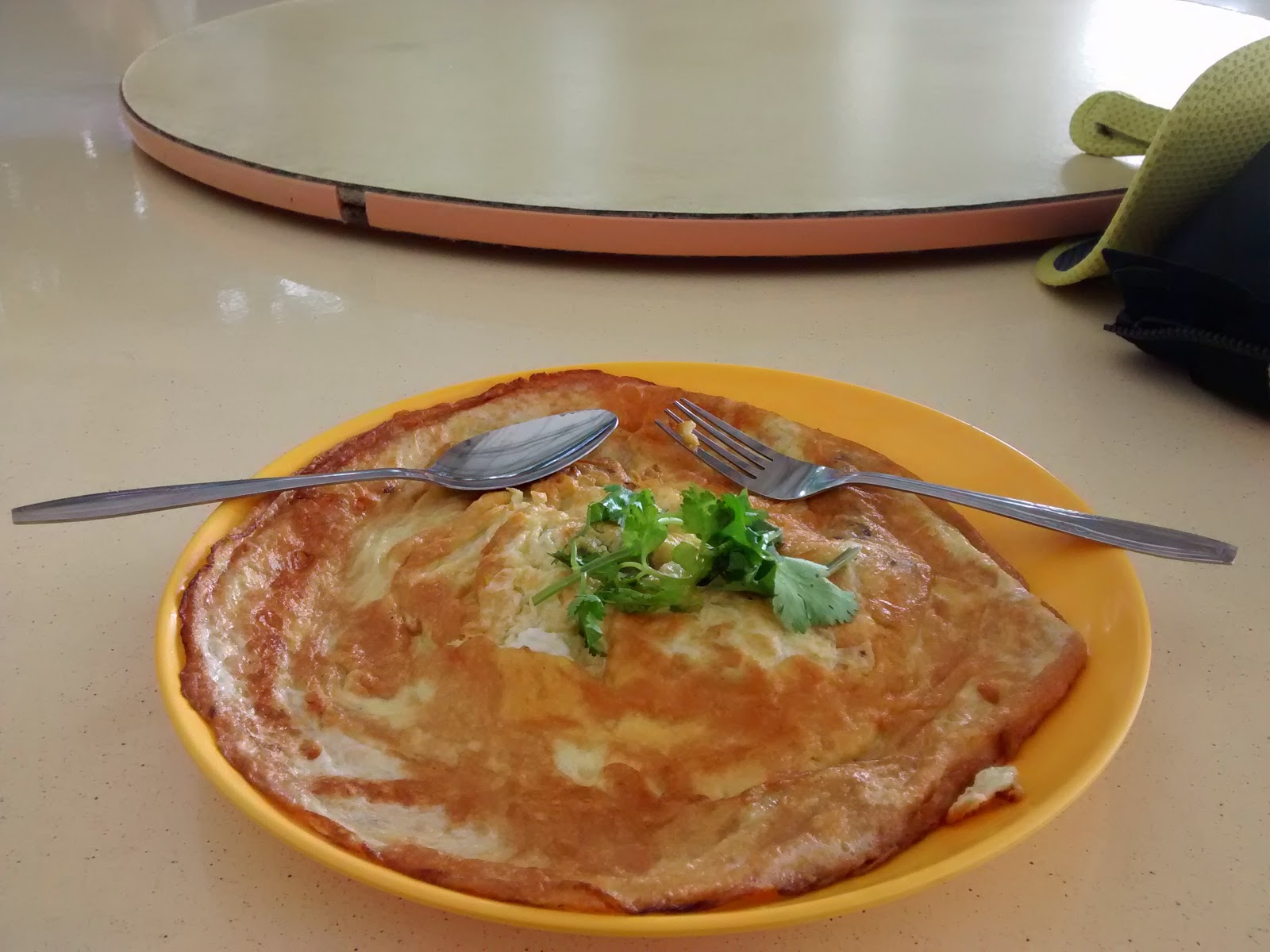 You don't get a bad one, and the omelette's terrific. You then spend a couple hours biking around the wetlands, which are called Chek Jawa. In fact, you're not allowed to bike around the wetlands themselves, and when you lock up your bike with everyone else's there are monkeys stealing things from bike baskets, whom you fail to photograph. There are also kind of cute wild pigs, lumbering about, whom you do photograph, poorly, like some "Where's Waldo" shit in a picture that's mostly of bicycles so you invite anyone reading about this to click on the picture if you they want to take a whack at seeing the pigs sort of. 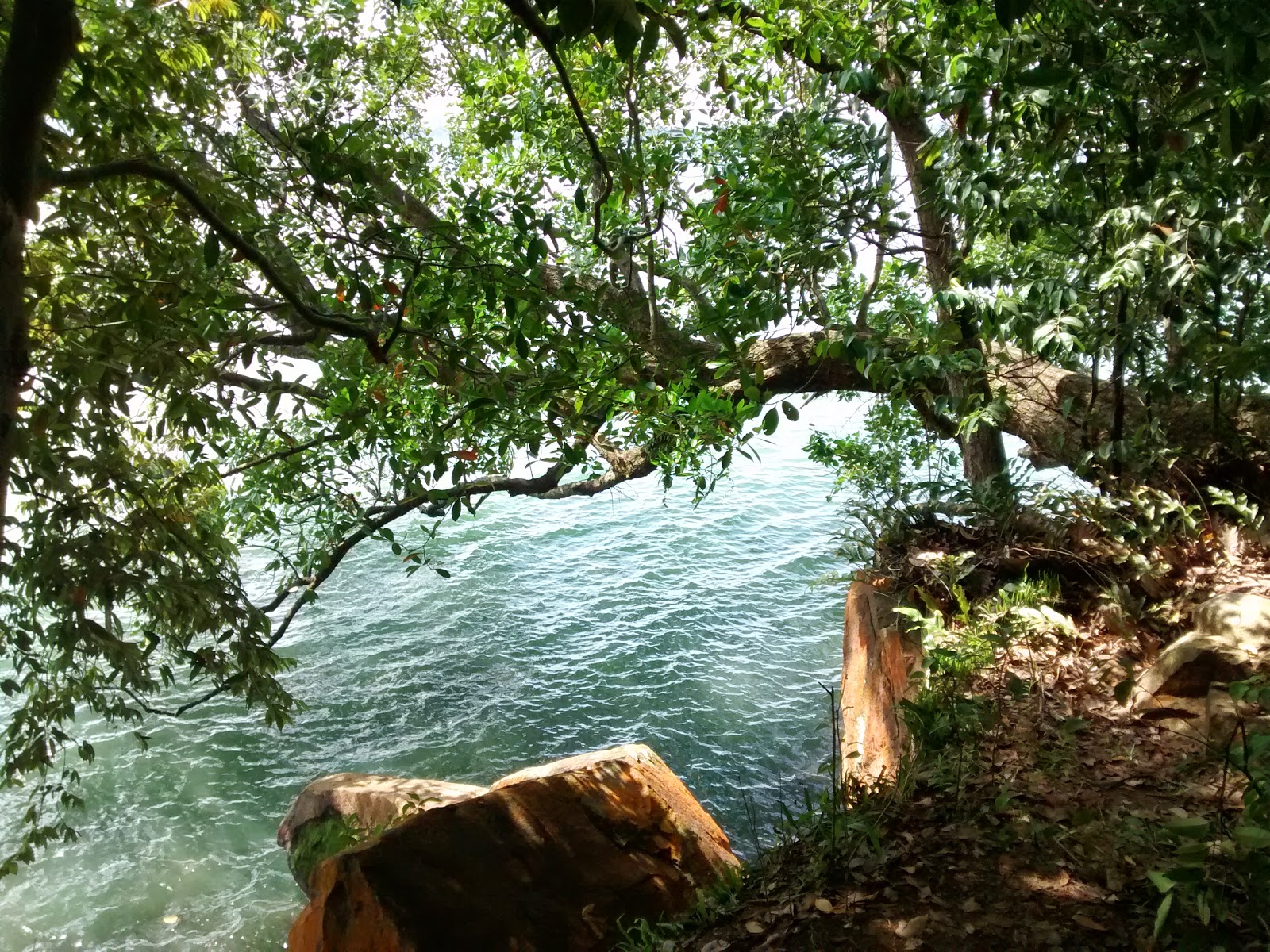 The walk through the wetlands really is beautiful.

There is a raised walkway along the coast and over the water. The tide is high, so you can't see as much of the coral and shorelife as you would were it low. 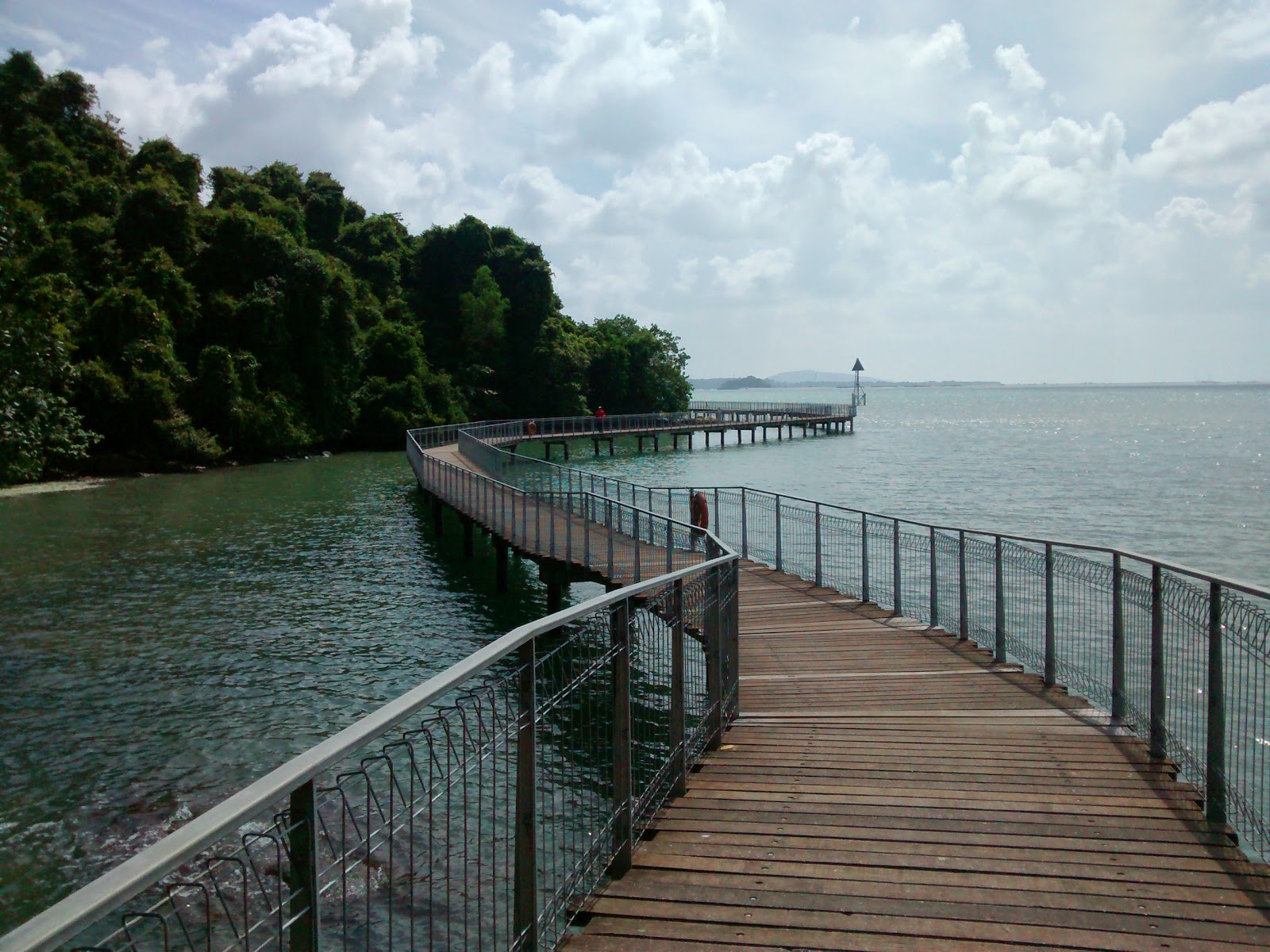 After just a couple hundred meters you reach what you've been warned about -- closure due to improvements, workmen tearing up the slats to somehow make things better. 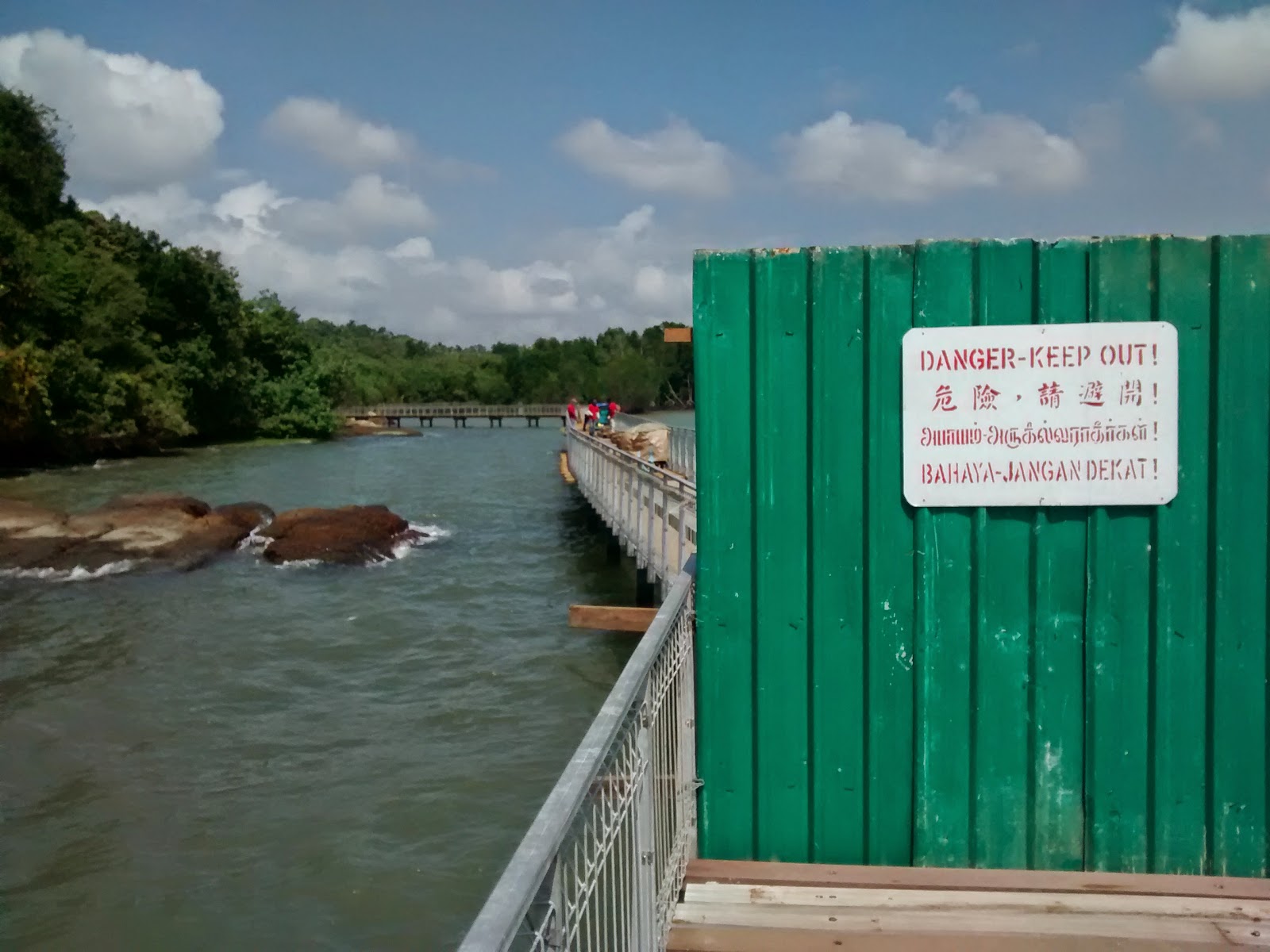 However! You still have your Chek Jawa wetlands mangrove forest walk. Very different from the coastal; where the coastal was open and hung out over the water, this is lush and overgrown amidst the muddy thickness of mangroves. 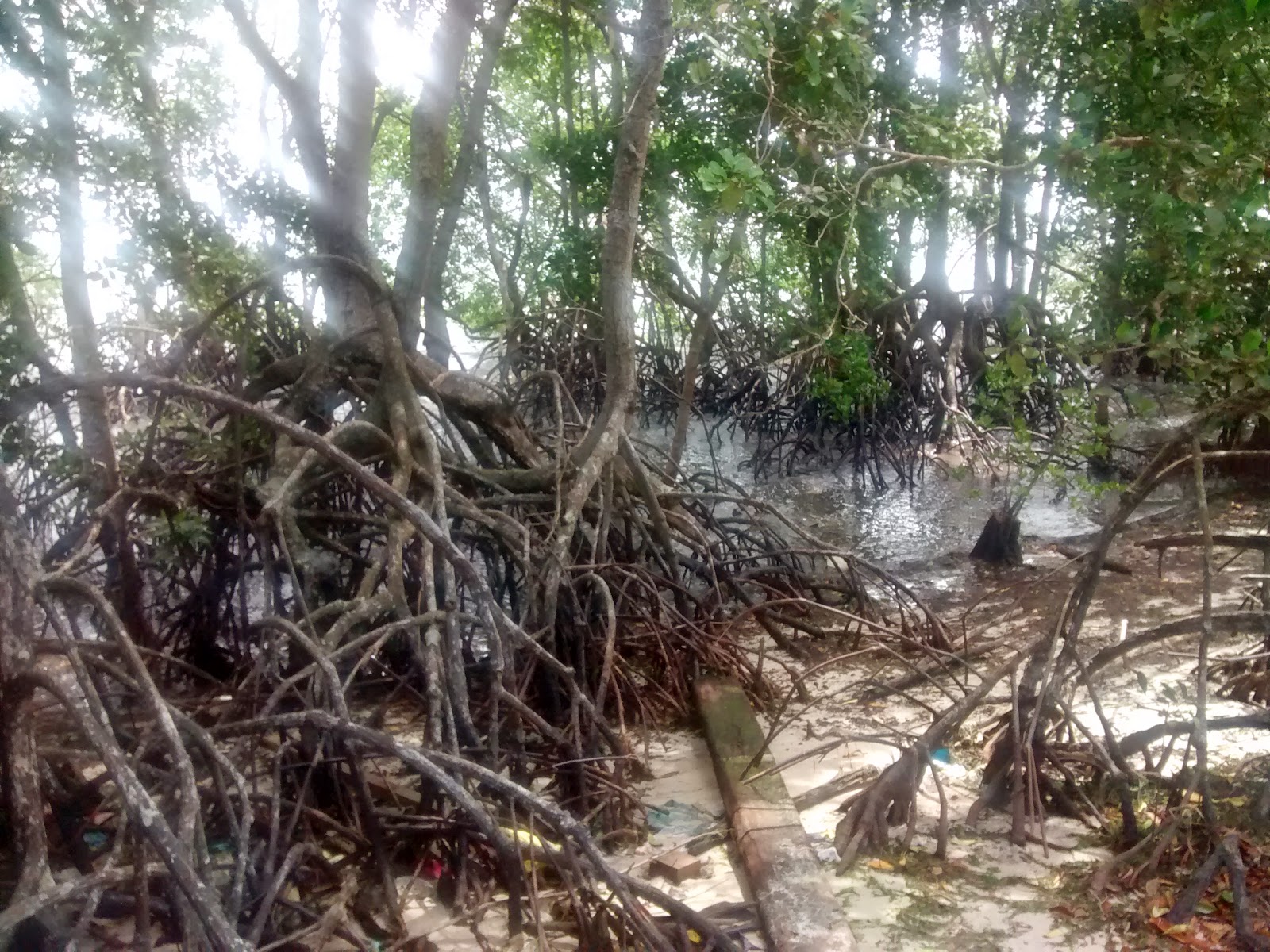 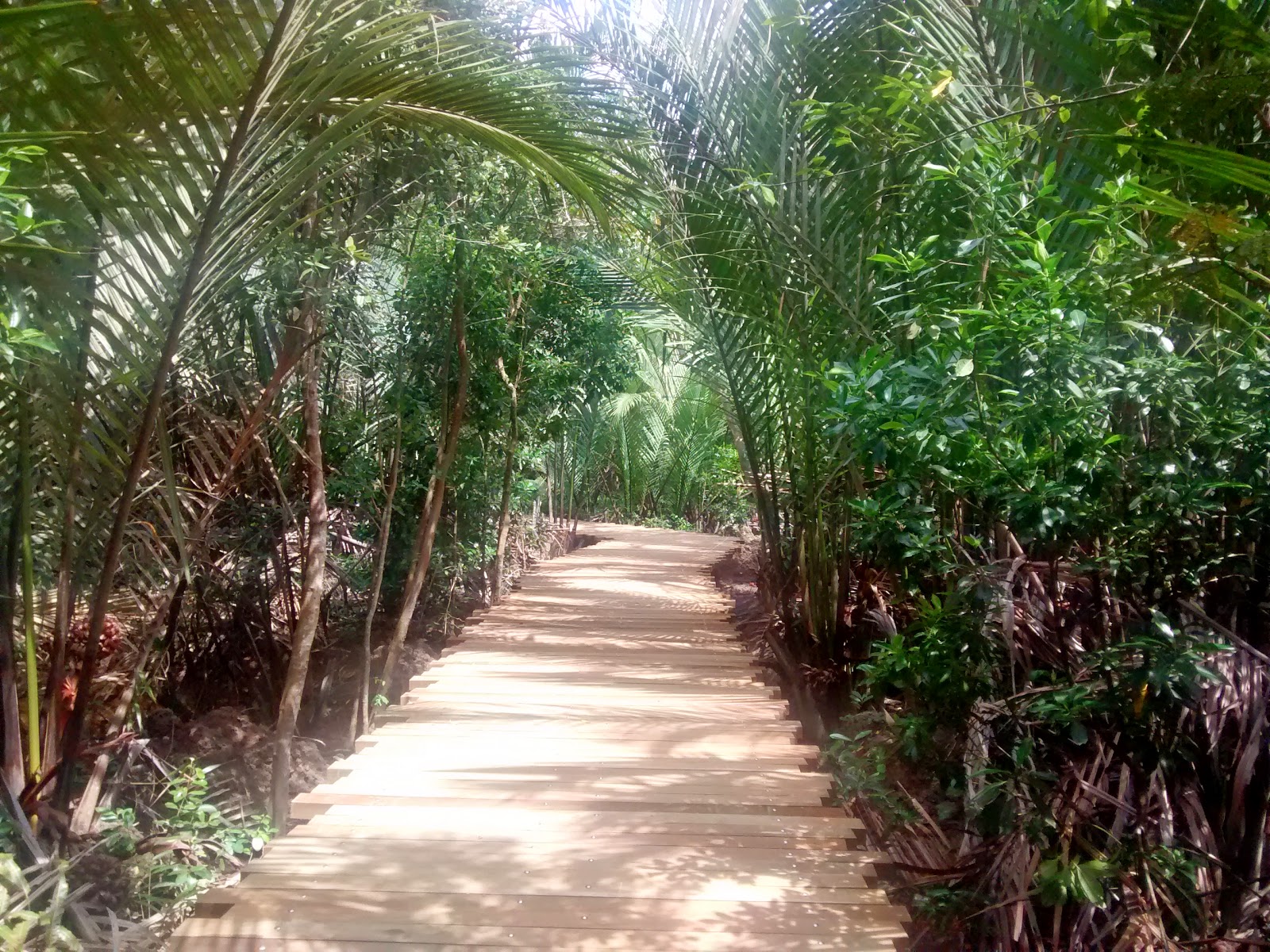 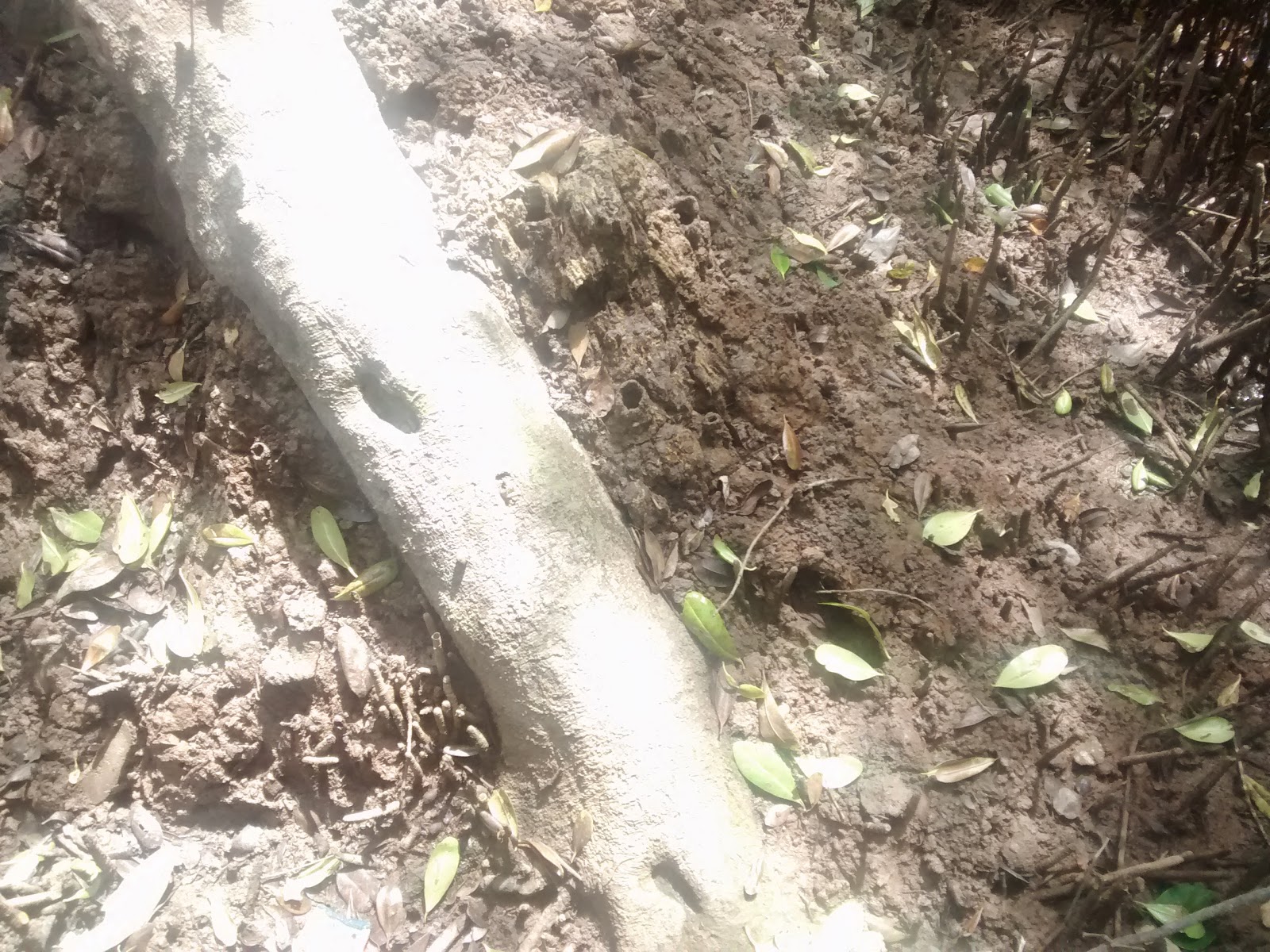 It's great. There are monitor lizards, including one longer than your arm that you manage to capture some video of. You are a terrible photographer/videographer. Why the hell does your spellcheck not recognize "videographer"?

At the start of the mangrove forest, there's also a nifty overlook tower. You climb up and earn the friendship of a mother-son duo taking pictures of each other by offering to take a picture of the two of them, together. You will run into this pair throughout the rest of the day, on your bikes, and they will always smile and bee nice and eventually perhaps even acknowledge the shared fact of the rubbishness of these !"$(% bikes. 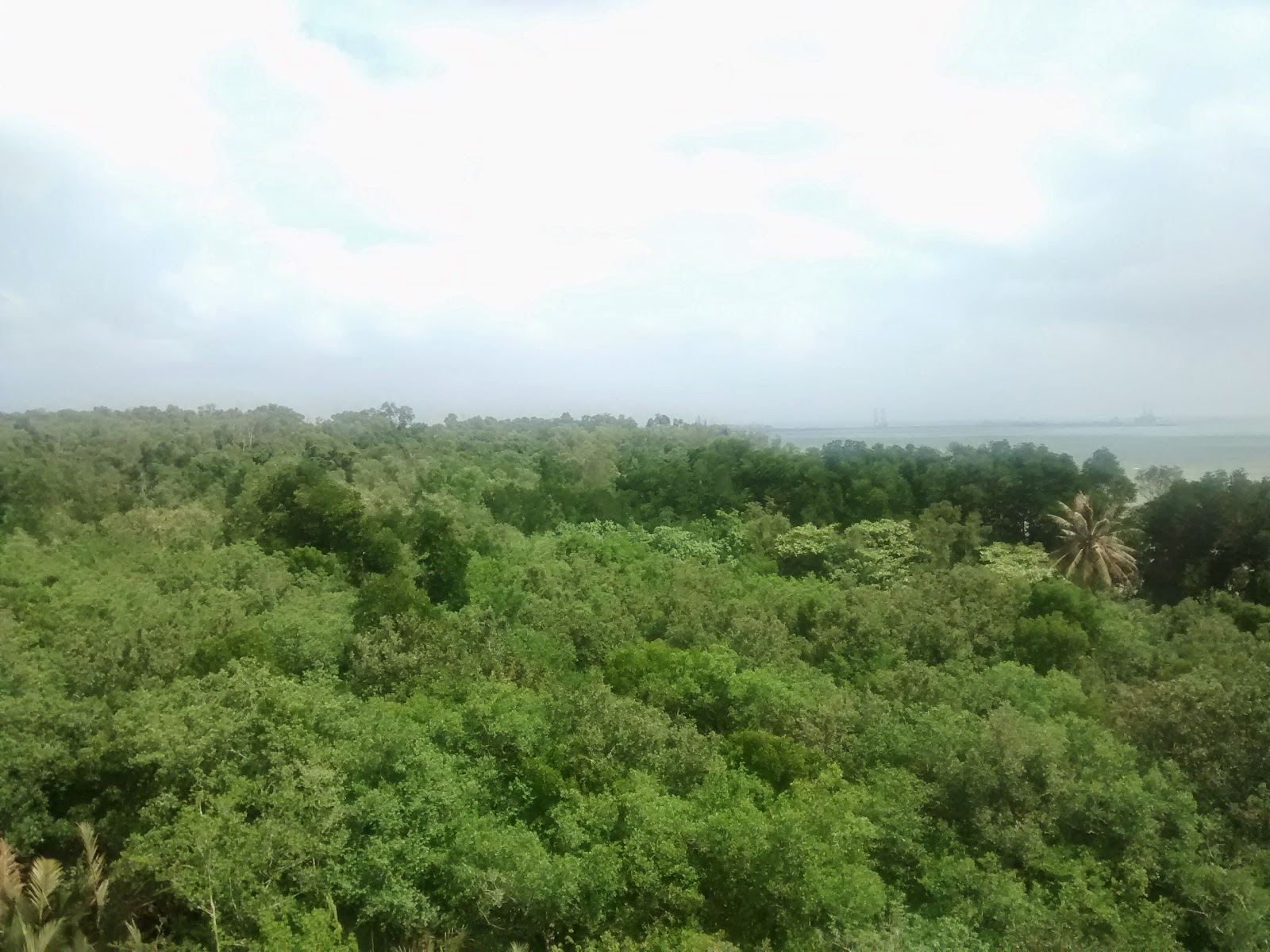 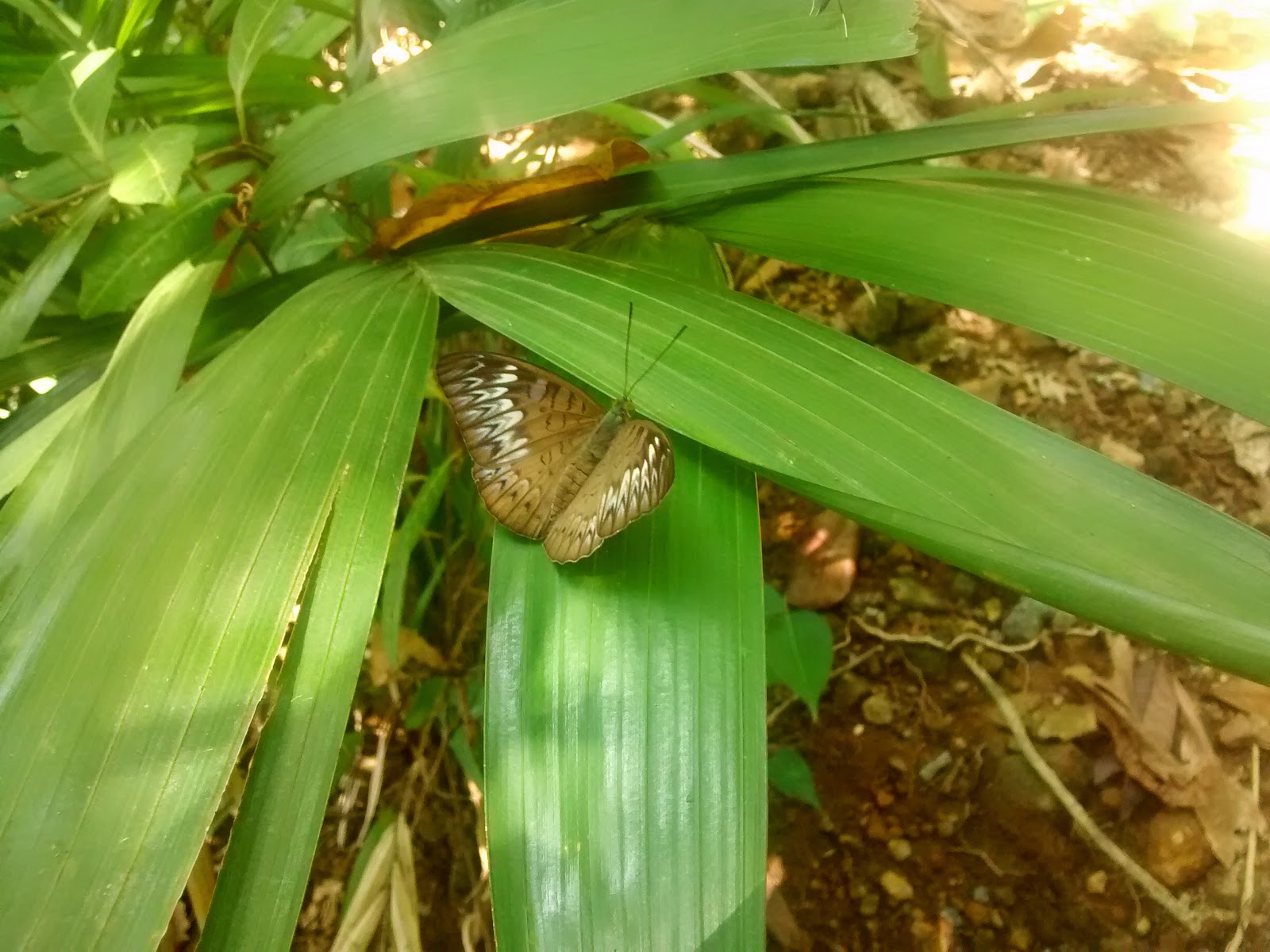 So, here's the thing. You are now done. Because: Chek Jawa is kind of the main reason to have come to Pulau Ubin. It was great. The other thing you'd had a mind to try out was the mountain-bike terrain park, but the fact that your rental bike is not suitable even for leisure riding makes that seem silly. Also, you were going to maybe eat some seafood. Done.

So you spend four more hours biking the island's little trails, and it's strange. 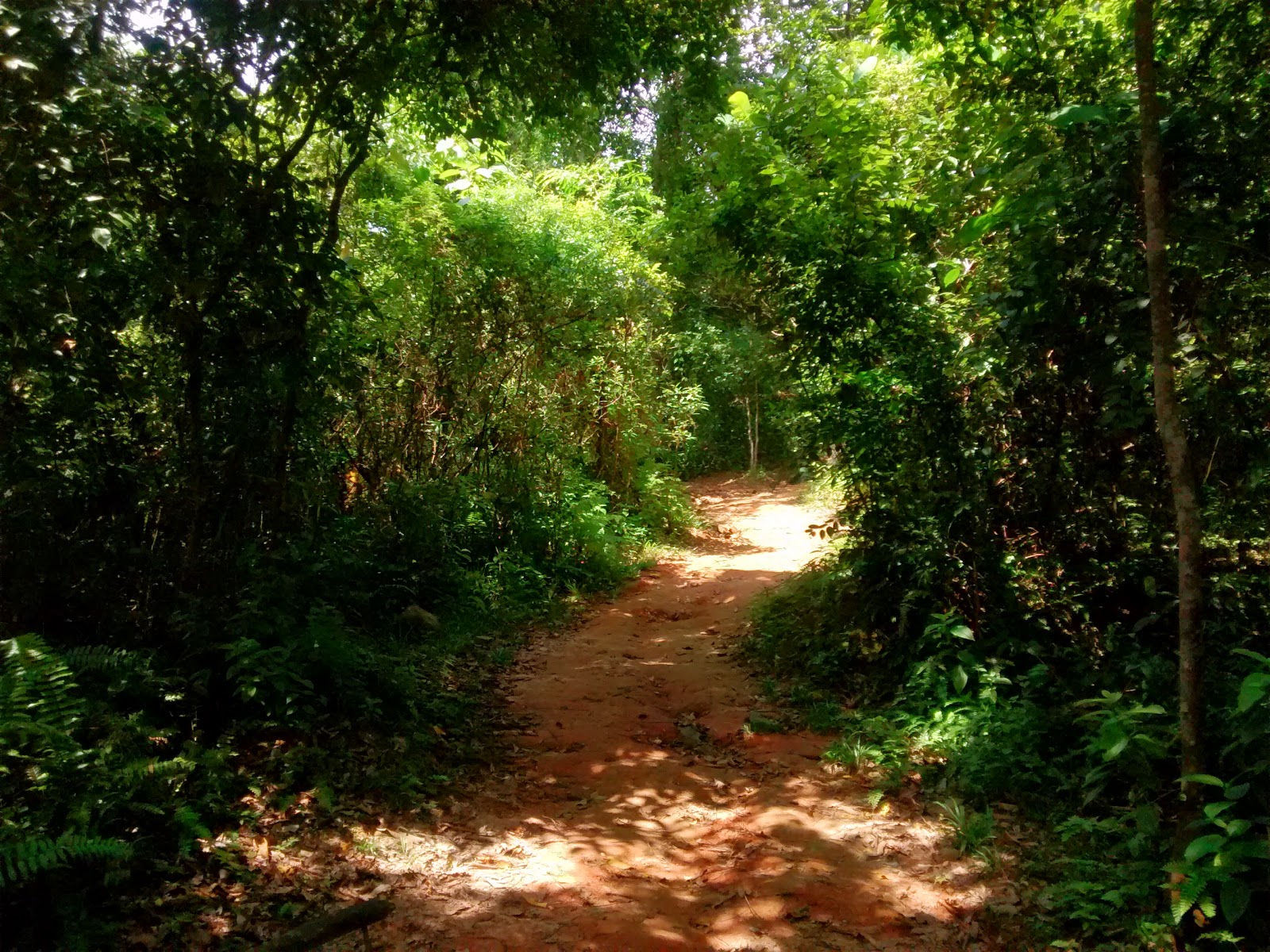 Because that's what most people seem to be doing. Wandering around on semi-functional, rented bicycles, moving vaguely amidst a number of totally nice pretty things that are not quite in themselves enough to justify anyone's presence. 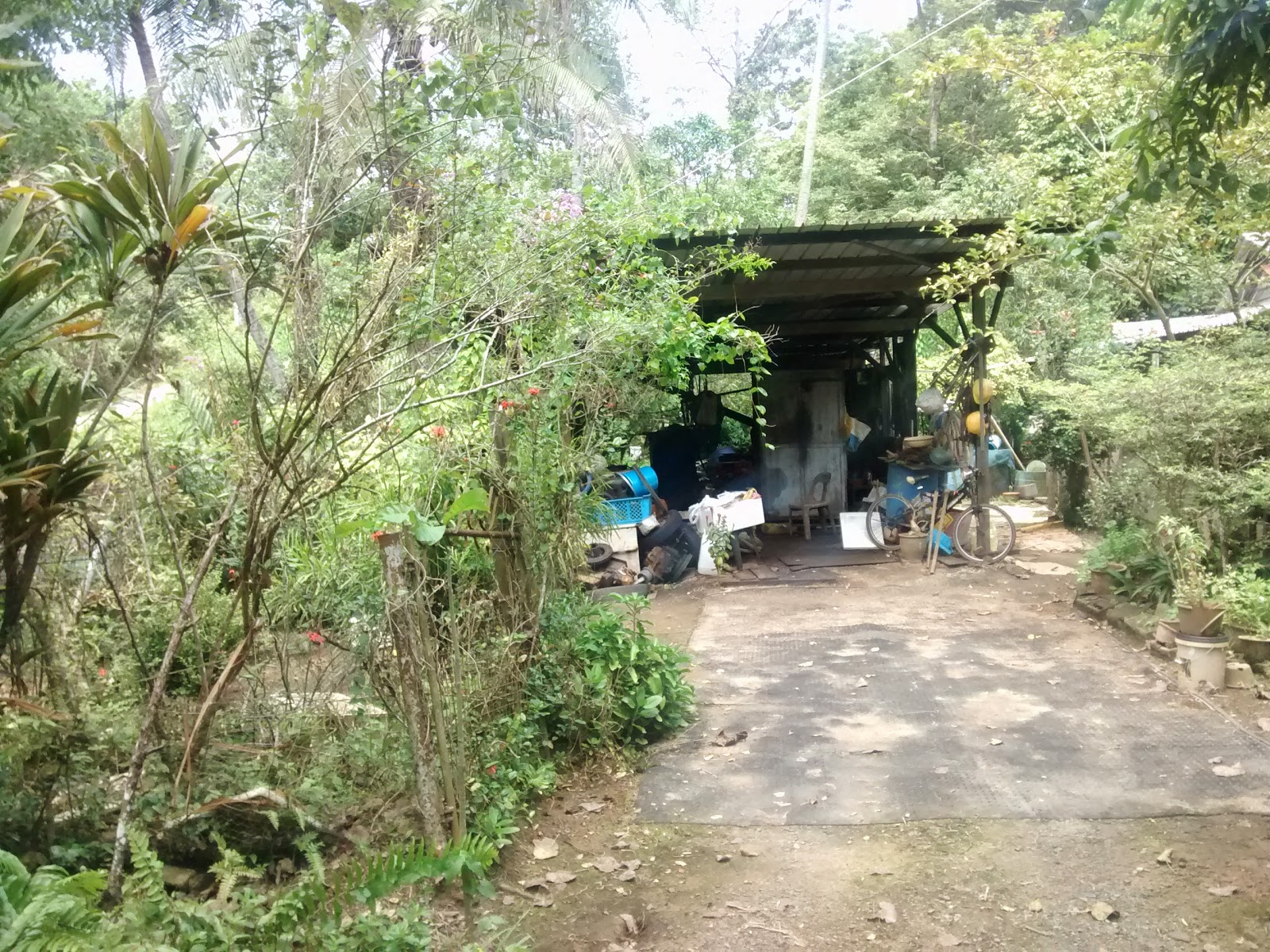 The much-touted "Singapore as it was" appears to be locals living on small plots in very simple homes, bric-a-brac with old unused machines and the like. There is also also subsistence farming going on, according to some of the tourist information. You don't see any. There are a number of stands open that sell coconut water. 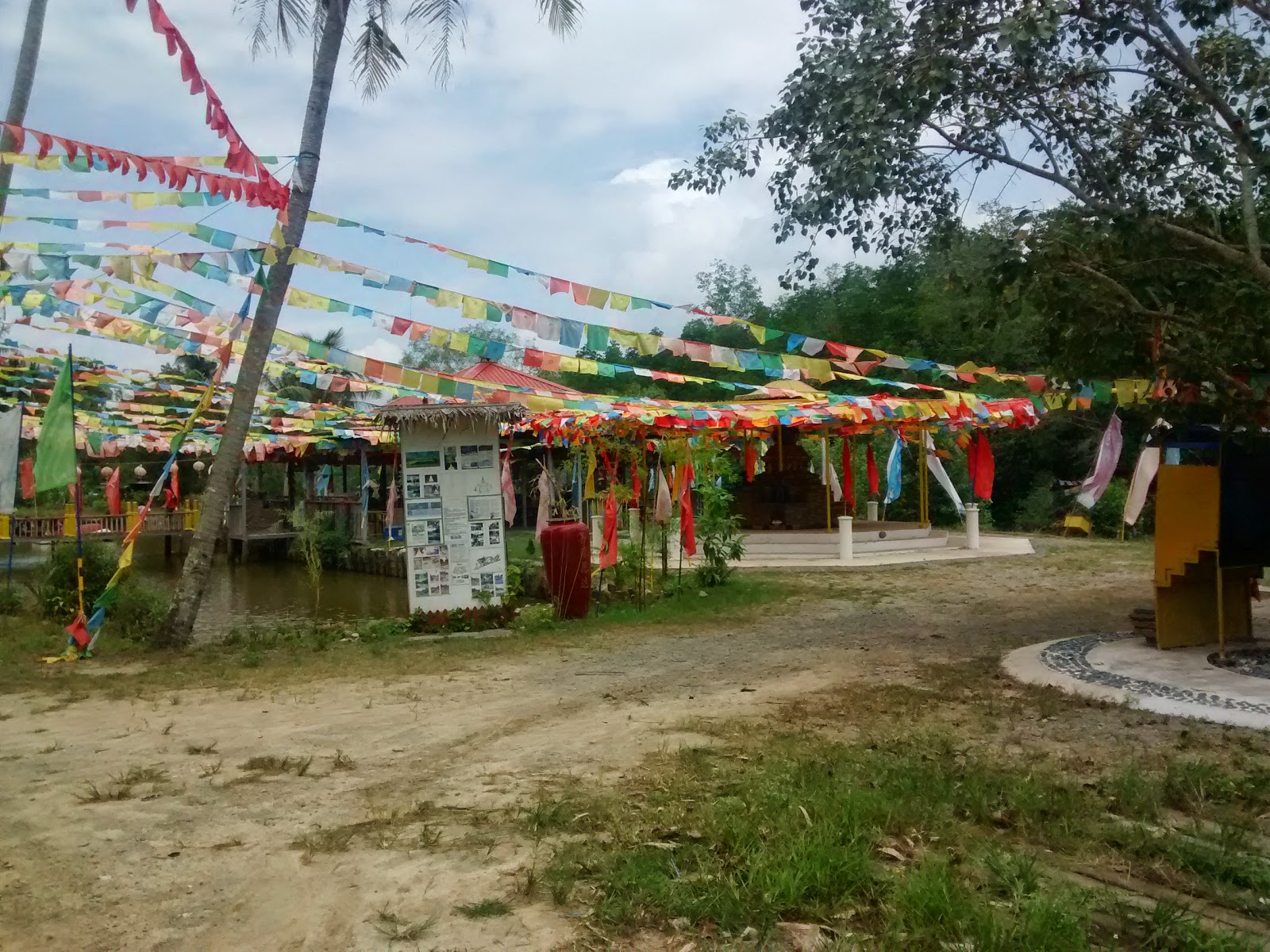 There's a pavilion that must be being prepared for the Chinese New Year. The flags are festive! There's a guy burning tires off to the right! 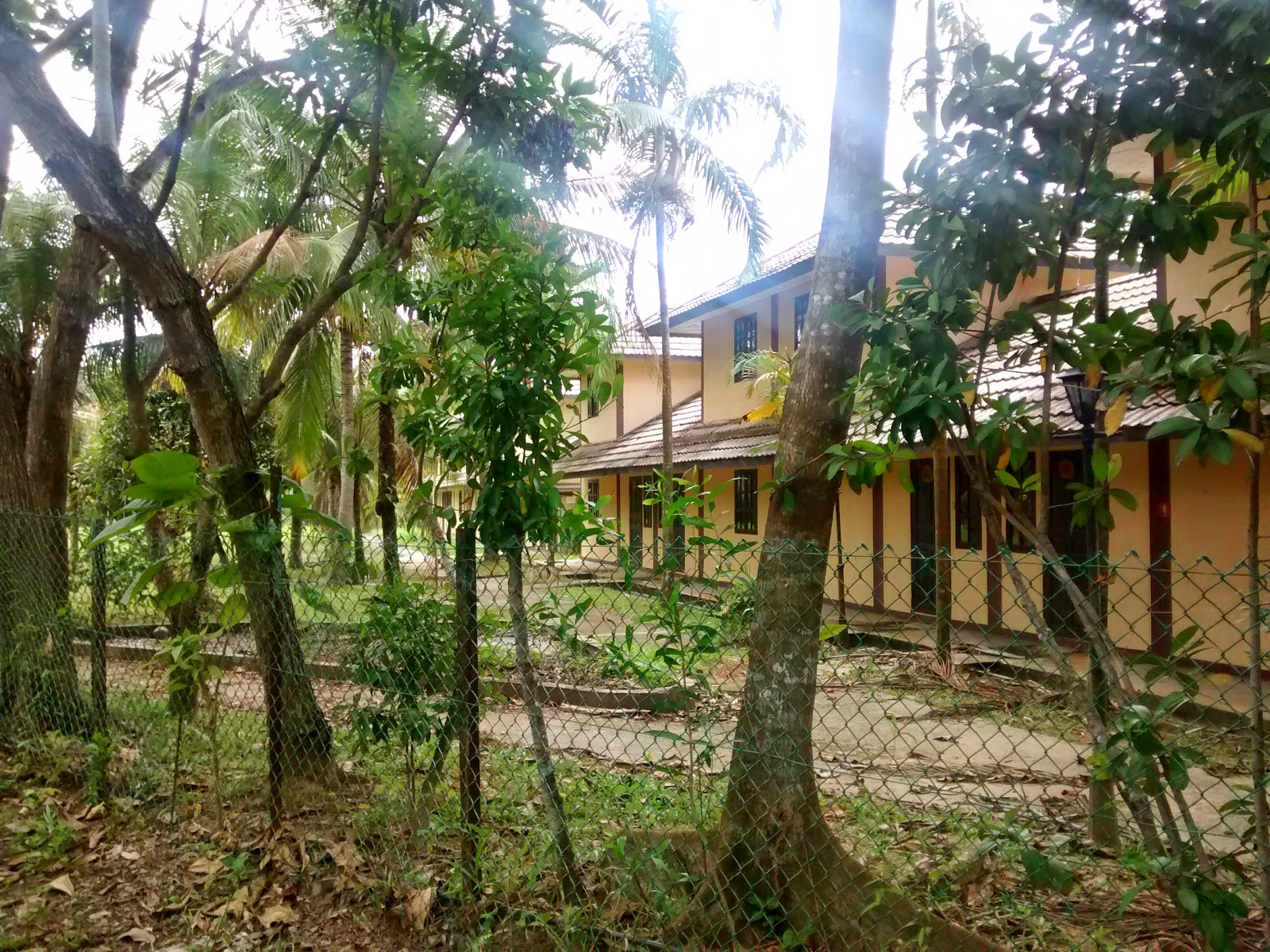 This is a compound of some sort. It's behind fencing. It looks like a tourist hotel fallen into disuse. 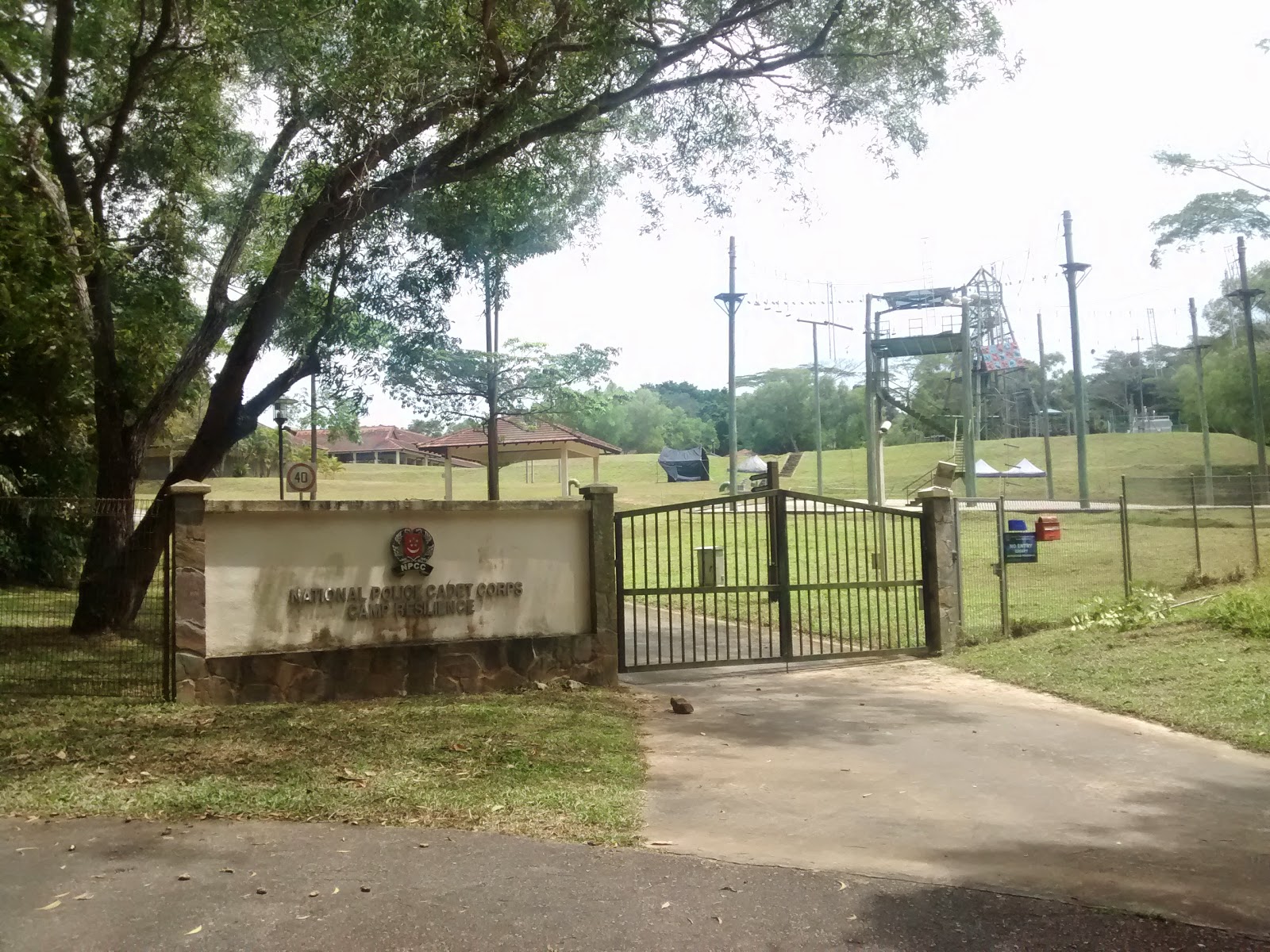 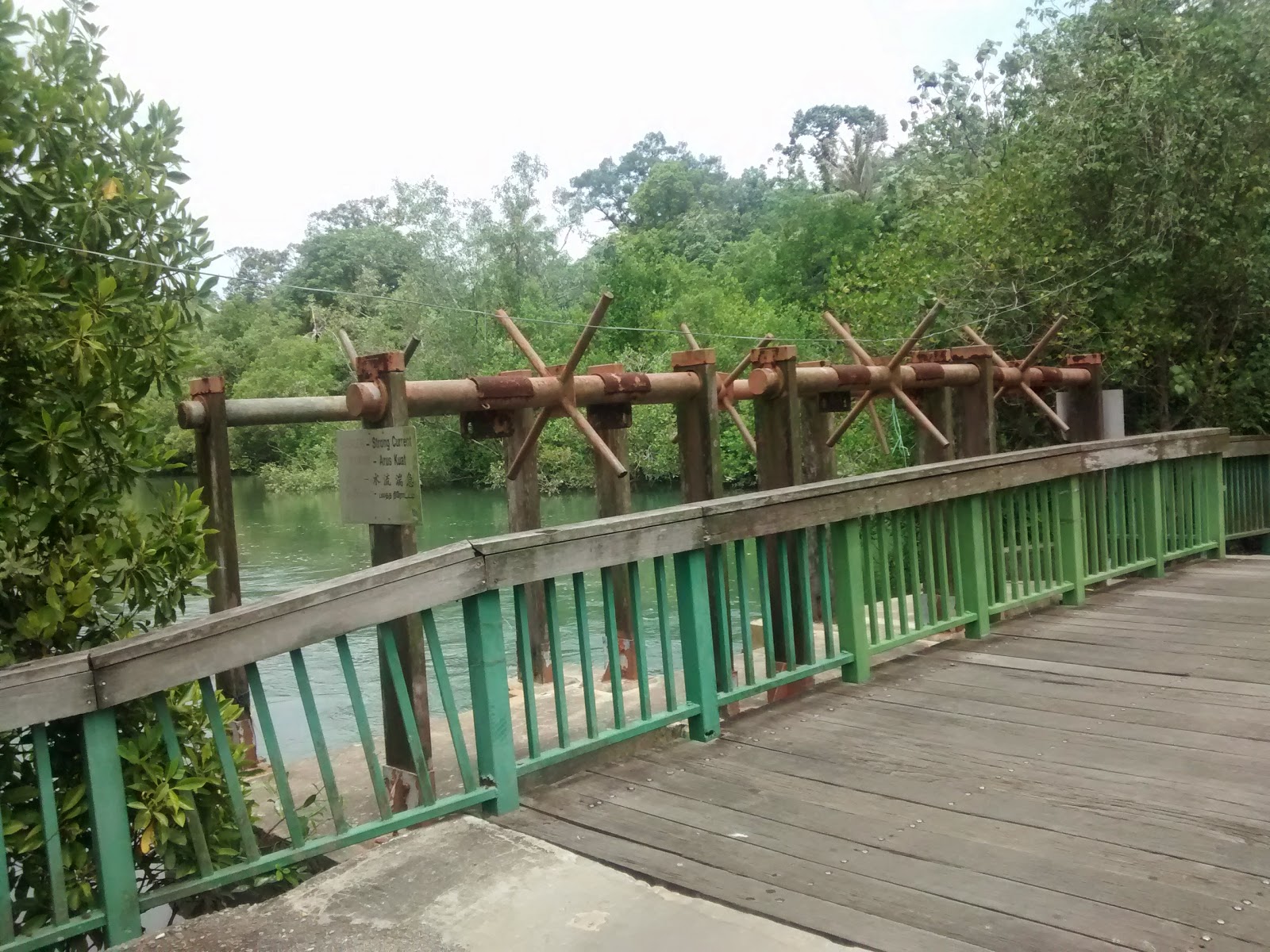 The bridges are neat. People fish off of them. 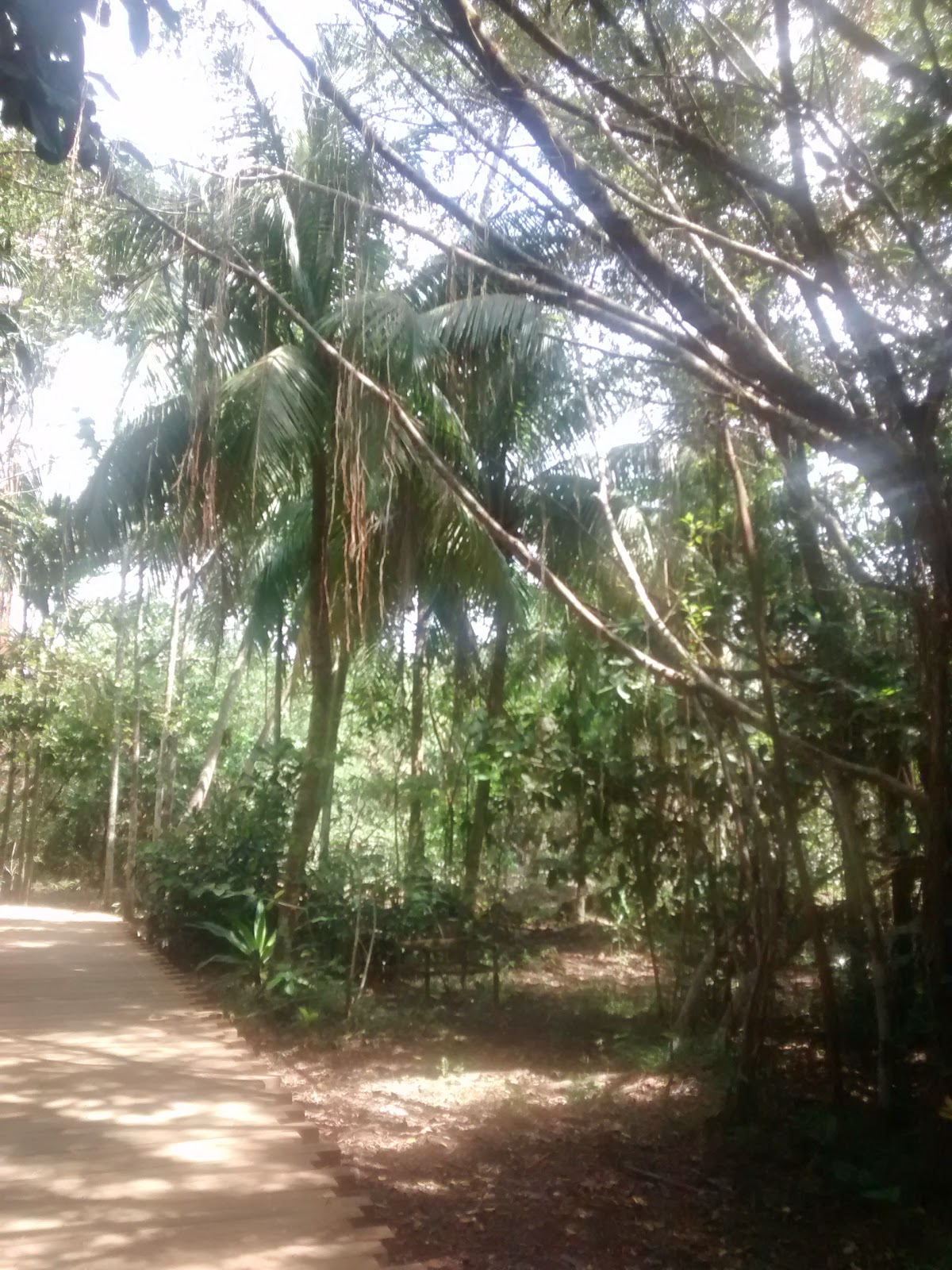 The thing that's funny is how none of this is focal, and you are one of many people -- people who seem to come from the wide array of cultures one would expect, in Singapore -- milling around on bicycles between them as though none of you are quite sure why you've come to this place. Which, given the incidentalism of your own presence, makes sense: other people might have arrived here by the same processes. I have some time, I'd like to go someplace pretty near Singapore. internet says: Pulau Ubin.

Here are the names of some places you go, because they are on this island and labeled on your map: Noordin Campsite. Maman Campsite. Jelutong Bridge. Ketam Quarry (mountain biking). Merbah Hut. Jelatok Hut. Sensory Trail. Puaka Bridge.

The exception is groups of people, who look possibly Filipino, who camp themselves on the small beaches you can find if you go off your bike on these footpaths in a few places. They set up with food from a cooler and hunker down, and the impression you get is that they're there for the day. Unlike you, passing through, cluelessly wandering. 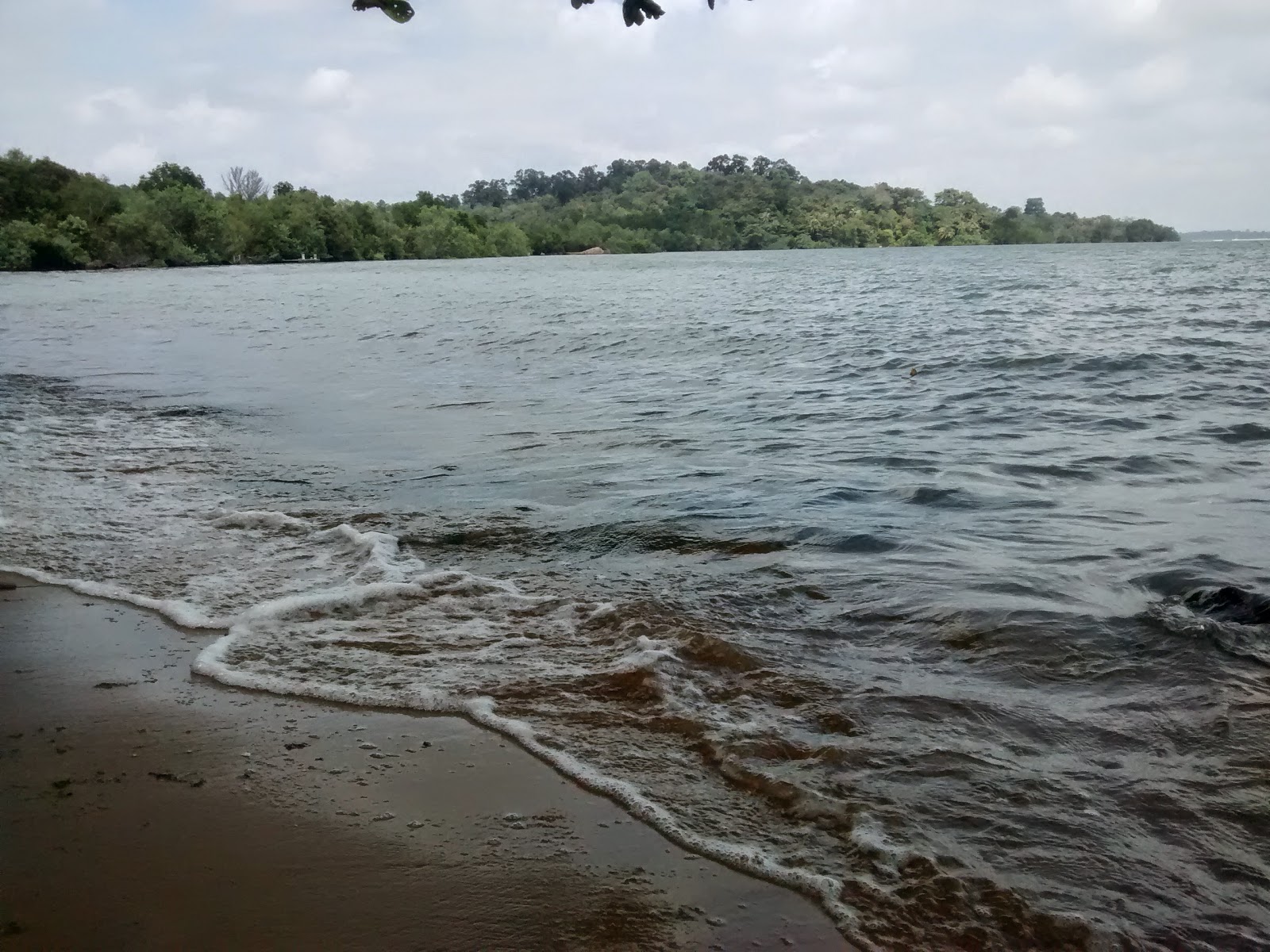 You do do the mountain-bike park, because what the heck, and it turns out that the easier trails (they're graded like ski slopes) are manageable even on your butt-tastic bike. You wind up at a beautiful quarry, which -- not the specific quarry, but the fact of quarries and stone -- is where the island's name comes from. 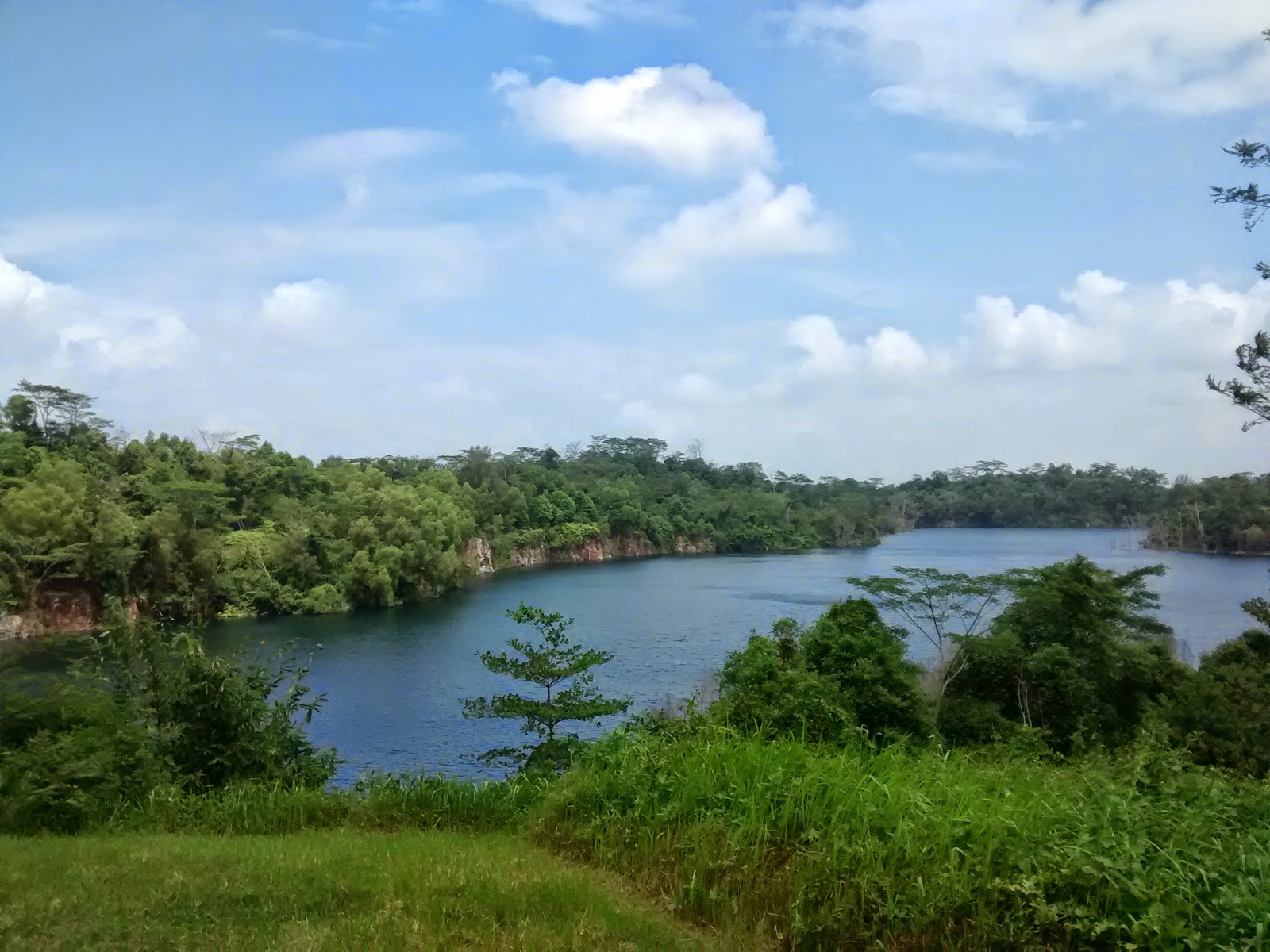 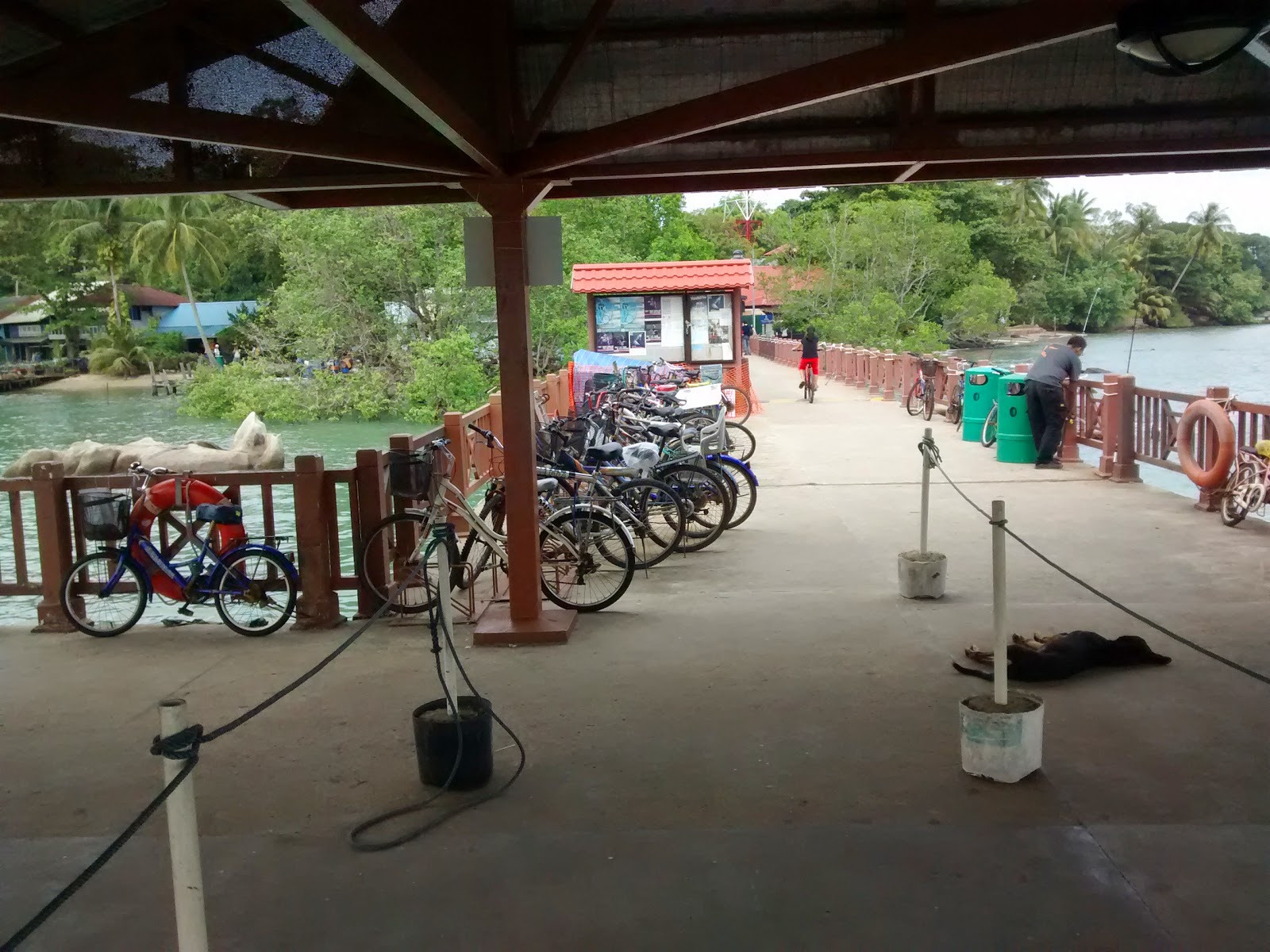 That's about it. You bike bike bike bike. Later, in your hotel, you will realize that your forearms and the back of your neck are burned - this isn't surprising. You return to the jetty you arrived, where some of the lazy, pretty healthy looking semi-feral dogs who wander about the island are laid out snoozing, and bumboat back.

The "hawker stalls" -- what in America might be called a food arcade, or even a "food court", although it is not organized around a central "court" -- on the mainland side by the pier turn out to be a treat, full of delicious and cheap Indonesian, Chinese, Indian, and Malay foods. You go twice: once at around 9pm, and once at 3am. Both times you get the exact same thing, an Indonesian set meal with two small fried fish, an egg, coconut rice, and tiny salted dried sardines. It's excellent both times; costs 3.50 Sing both times. As you eat the second, it occurs to you that this may be the last meal you ever eat in Singapore. This second outing, late, there prostitutes around who seem to be men cross-dressed, and perhaps some who are pre- or post-op trans. They put the sale on you, which makes this trip a little more the less-fun kind of adventure. Mainly you feel bad about it, because maybe white guys wandering around at 3am who are guests of the one touristic hotel are exactly who they ought to be selling to, target-customer wise.

In a small courtyard between stalls, there's an inflated Chinese Happy New Year in good-fortune red, about 15 feet high. 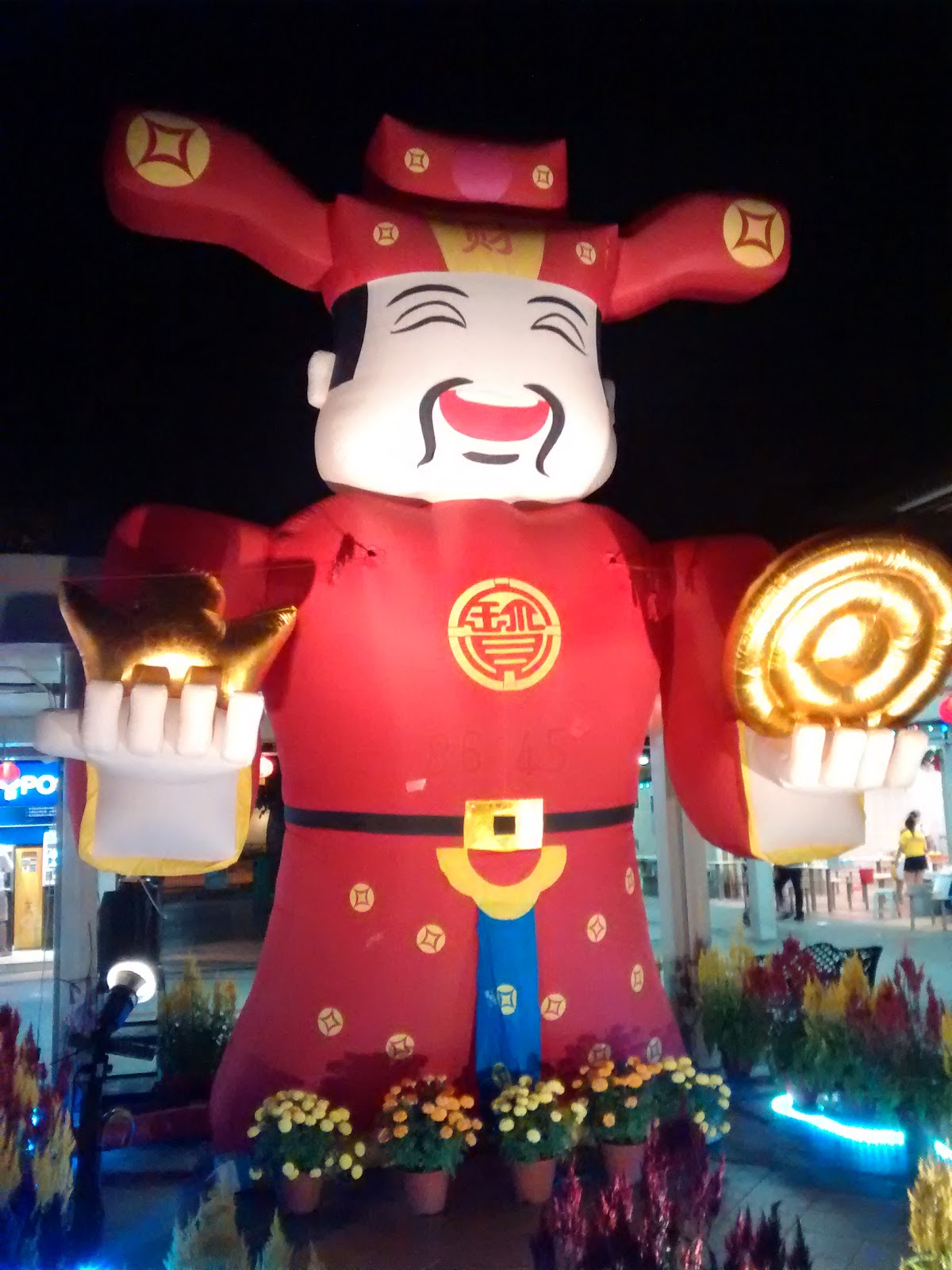 Posted by slimbuttons at 7:23 AM No comments: