Roger Machado said this to a group of us training with him this evening. Machado is a really impressive martial artist and teacher of Brazilian jiu jitsu, and the session with him tonight was great.

He offered this as an inspirational thing: if you stay fit and moving, you’ll feel great for a long time. He told us about a 74-year old student of his who moves better than some of us do, and he talked about his uncle – one of the famous Gracies, I don’t recall which – who was rolling (what they seem to call randori in BJJ) into his 90s. I don’t doubt this; I’ve myself trained with masters in their 60s and 70s whose strength and flexibility were extremely impressive – not “for their age” but just plain impressive: you did not want them to hit you.
So I thought Master Machado’s comment was apt and inspiring in that way. But I particularly liked it because it contemplates the vicious flipside with more honesty than phrases like “you’re only as old as you feel,” which has a connotation of its being your fault if you are (i.e., have allowed yourself to feel) old. I’ve had, and I imagine many people reading this have had, family members who aged very quickly after an accident that impaired their mobility. “She was doing fine, but then she broke her hip and it was like she aged 5 years in six months.” People whose mobility is gradually taken from them by arthritis or other degenerative condition, similarly, often speak about and mourn it in explicit terms of well, I’m old now.
So it’s a goal, yeah; but it also feels like an honest address of how things are.
I better keep icing this knee.
Posted by slimbuttons at 1:11 AM No comments: 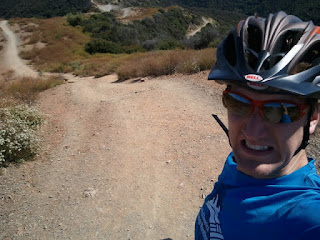 Westridge is one of many trails along the spines and canyons of the Santa Monica Mountains. Its trail head is a few minutes’ drive from my house, ascending up into the hills through a nice neighborhood to reach the actual start of the fire road that leads out into the mountains. It’s a great run and a great bike ride. I’m not so great at the bike ride part yet, as this post will attest. 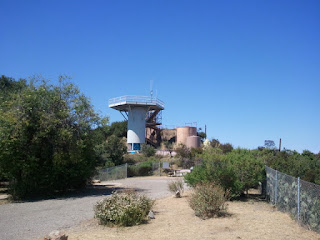 This is the Nike Radar Tower, which you reach after about 3.5 miles along the trail. It used to be part of a radar defense system against Soviet attack. Now it’s a nice lookout: you can look northeast up into the valley

or southwest into the mountains and canyons of Topanga State Park.

It’s a common turnaround spot, and on this day, my first day back biking after hurting my foot, it seemed good enough.
The trail actually has two parts: the fire road and the single track. The fire road is straightforward: it’s the road for official vehicles to drive in the event that they need to be there, and it pretty consistently goes UP on your way to the Nike tower (very tiring) and down on the way back. The single track is way different. It’s a rocky, craggy, narrow trail (one person abreast, often semi-overgrown with grasses) that traces the very spine of the mountain, so it’s always swooping up and down and up and down. I suppose it has to overall trend in the same way that the fire road does, but it doesn’t feel like it. I was once told to run out on the fire road and back on the single track, because then “you’re never going downhill.” That’s definitely how it feels.
I was going to ignore the single track on this run because (a) hurt foot and (b) it’s too hard for me. It’s actually more the steep descents than the challenging ascents. I can’t do the descents; they’re too steep and shale-y and I’m not yet a good enough biker. But as I was zipping briskly downhill on my way back along the fire road I caught site of this crest and thought it would be a great place for a picture to share with folks and so I took the ascent and got my shot.

The problem was that I now had to get down. After a couple of fails (dismounted) and near wipeouts, I faced another steep downhill and used the appearance of a man and his ridiculously low-slung dog approaching as an excuse to pause, brace myself, and figure out if I actually wanted to try to go down this thing.
The man comes up, I say hi. He says hi. Late middle-aged guy, sunglasses and pepper hair, lean and tan. The sort of guy you might expect to be out with a low-slung dog hiking the single track at 3pm on a workday.
The ridiculously low-slung dog hunkers on up, smiling and plucky. As he’s still about 10 meters away the man – either wildly misreading me or simply self-conscious – apologizes that, “he’s hurt his hip, or else he’d be hoofing it.” I allow that I think he’s doing pretty great, and the little dude chugs on up as we encourage him.
They turn to leave. I start to go down in my clearly incompetent way when the man’s voice comes back.
Have you ridden this before?
No, I’m learning it.
Well, as a guy who’s done it hundreds of times, the thing on the steep parts is your butt.
I regard him.
You get your butt out back, behind the seat, and then it’s easy; you can actually slow to a step (he mimes putting pressure on the brakes) 3, 2, 1. (he throws his arms out to the side: “I have stopped”) And you know: rear brake more than front brake, and don’t stop to suddenly or you jam your balls all up.
I’m nodding during this but it’s a total revelation to me. I suppose I had imagined that there would be tricks and techniques to trail biking, but I’d never actually heard any and it sounds like this is going to be enormously helpful. I thank him and he and low-slung happy trundle on. 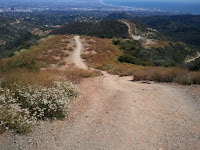 I give it a try. Oh, he also recommended that I try this out on this bit right here, since it’s not too steep. In this, he is wrong. “This bit right here” is steep as shit and I’m pretty sure I’m going to totally eat it going down. But his advice turns out to be fantastic. It’s hard at first, but after a little while I’m able to descend veeery slowly, basically working the brakes the whole way, but pushing my butt back more and more and feeling out how that changes my center on the bike.
I’ll keep posting on the Westridge single track. I have a feeling it’s going to be a theme of the next few months, getting the hang of it. It’ll be a great day when I can actually ride it.
Posted by slimbuttons at 10:37 AM No comments: