Fallout Shelter is Awful & Small-Minded and Also It's Really Well and Carefully Made and... What the Hell is the Deal with Games Like This, Anyway???

This is an angry, frustrated Labor Day post about a popular game, a style of game, focus, effort, work, and how we relate to technology. It's pretty self-contained. If you wish to read more: we're talking about Fallout Shelter, a new-ish mobile game that's a huge hit. The internet has a TON to say about this; as will become clear, I pretty much agree with these thoughtful, backlash-y, negative views of it.

Fallout Shelter's a resource-mining game, which means that you periodically log in on your phone to check how your Shelter (or "Vault", in the game's parlance), an underground self-sufficient community you're creating, is doing. Your shelter looks like this, after you've built it up some: 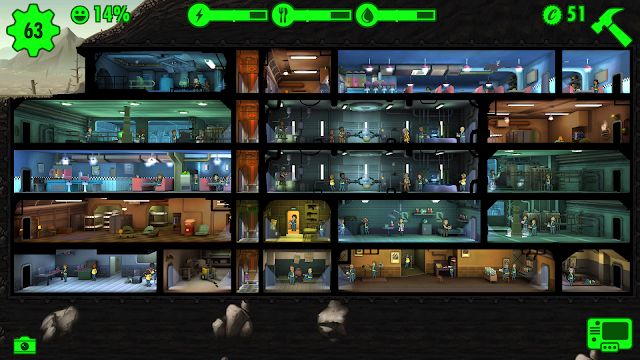 You build different kinds of rooms, to power your Shelter and Feed and Water its residents. You move them around according to randomized abilities to farm those rooms, basically. (I'm using capitals/terms per my own rubric, here, for the purposes of this post.) You put males and females together in what're basically sex-rooms to do basically that: they then make babies. You do all this building using "Caps", a resource represented on the upper-right of the screen; you can earn Caps by doing stuff in-game or, of course, shelling out some actual $$$ (like, from your meatspace realworld monies) to hasten your progress in this ridiculous f$*#ing fish tank inside of your phone.

You try to keep your Residents happy. Sex makes them happy, and they dance before having it. Being hungry/thirsty makes them sick and unhappy. This leads to humorous juxtapositions such as this, of which the internet is full. Also: costumes (which give them abilities). I'll spare you that, Reader. Google it if you like.

The sensitive Reader will have already divined a tension in this post; I'm taking a glib, screw-you tone about a game that (a) I've admitted I spend lots of time with, and (b) I'm clearly moved to share screenshots of. I guess I think these screenshots are worth your time, Reader? I do. Because the screenshots are great. That color palette is great. It looks lovely, even on my tiny stupid cracked phone screen. And these "humorous juxtapositions" about which I was all too-cool-for-school, one paragraph up? They are awesome. They're funny. Opening up the game and clicking the little rooms and hearing the sounds as the resources I've mined go ching ching kerCHING--this style of "game" (or, whatever: game) can be addictive, and I've got my situation under control but I won't front: I'm here, writing this, because smart and talented designers have worked successfully to make a compelling, lovely product. I am serious: I admire these designers, and not (just) in a cynical way. They made a terrific thing.

A thing that's also bad, and diminishing my life, and I strongly suspect diminishing those of others', and without which the world would be a little bit better.

A lot of this boils down to the mechanics of how you play the game--the mechanics of finger swipe-swipe; select character; give character new gun/clothes; etc. These things are at once minutiae too boring to recount, good Reader, and the crux of the issue. Because they indicate and guide what the game is about. As the cherry-picked selection of internet negativity that I linked to at the start of this post argues, Fallout Shelter is a repetitive and cyclical exercise that asks you to learn some basics but, after that, requires neither fun gamey "twitch" skills (coordination, timing), nor strategy in any meaningful sense.

What it asks of you: time, attention, thumbs.

Periodically, things go wrong in the Shelter--fires, Radroach infestations; also, you get attacked by baddies from the outside world. You can screw up, in how you handle these disruptions. I screwed up: I didn't give enough of my Residents in the top few rooms good guns/costumes, so when some things called Deathclaws attacked for the first time they housed me, as I attempted the ineffective swipe-swipes that are this game's poor answer to actual contextual gameplay to kit out the Residents facing them.

After that, my Shelter went through The Bad Times: corpses everywhere, power low, no food or drink -- inhabitants miserable and slowly dying although, I think, they can't actually DIE of food/thirst (not sure); certainly, it makes them sad and makes it really easy for anything else to kill them.

I kind of gave up--that something so capricious as "Deathclaw Attack!", and so actually manageable (I had the necessary guns/costumes, I had just optimized the Residents for performance in their rooms qua farming rather than defense so... etc. who cares.). I let the Shelter drift, miserable, for... I don't know, a day? And then I sent everyone out into the Wasteland to die. If you clicked that link, my feeling was different: not an experiment in culling. It was existential; I felt bad about leaving the Residents alone in their misery, and so sent them out, on missions for which really only the most leveled and geared of them were prepared.


So, we're at another juncture where I need to self-check. I'm sitting here writing about this, so evidently I somehow feel that it's worth reading about. And I did these things, with my time/brain, freely--there is no coherent model of external pressure in which I can punt the blame for ANY of my wasted time, here. AND, I kind of enjoyed applying my dire narrative to my Shelter: the early flourishing, the weird baby-makings, the Deathclaws, the Bad Times, and then Exodus: Absolution. People who write about games talk with admiration about narrative that's emergent from each player's gameplay, rather than a proscriptive story everyone follows (even if that story has "choices", etc.). I won't ignore the fact that Fallout Shelter is immersive and well-designed enough to have provided me with some of this, even as I played it in stolen, guilty 10-minute sessions, sitting in my car by the ocean, before doing something actually good and getting into that ocean to swim. (I think that ~55% of my time in this game has been in that specific context).

But what the f#$* did I have to show for it? And, in fact and more to the point: what the f#$* do I have to show for it? Because Reader, here's what I did. I used my last few caps to resurrect some of those Deathclawed corpses. I put them back to work. I broke down some rooms, so that I'd need less power; I got rid of the Radio s$1t, so that attacks would be less likely; I rebuilt. And there was, for a little while, pleasure in that. Cuz, I mean--you see that 04%, upper-left in the image above? That's my Shelter's happiness, as I sent its Residents out to their open-skied dooms. So there was some kind of challengepleasuresomething in getting that number back into the 90s, where it now resides (might have dipped some; I haven't checked yet today). I prepped for Deathclaws, which in no way required links like that one; it was self-evident, what I'd done wrong (I have not even read that link. I assume it's about Deathclaws, and how to prepare for them. if it isn't: apologies, Reader).

And now I'm...back where I started, I guess? But further along, and... better? Actually I can see that I've overpopulated, so I better build some rooms that produce Food and Water or else ET FUCKING CETERA.

Reader, two questions lie under this post: one big, one semi-.

The semi-big: what's the significance, culturally morally aesthetically whatever, of these casual games and their insidious microtransactions and their--I'd say--much more insidious microtransactive demands on our attention? Here's a long article about how the whole thing is very crappy. But are definite positives: what big businesses these studios create! And at what cost, really: surely these games aren't as "bad" for us as, for instance, imagery that demeans and objectifies women that we all see every-fucking-where, right?

So what's the big deal?

And a ton of creativity goes into these things; I admire it--I'm not joking--every time my little soldiers in Clash of Clans (different game; similar deal) march off to the shores because I've "donated" some of them to a player with whom I'm allied. The argument that these games are "cynical" in the sense of being dashed-off, shoddy, poor worksmanship falls hard at the first hurdle. As I said at the top: talented people, working (I imagine) quite hard, making entertainment products that are profitable.

The big question... you know what? I literally don't even care enough to articulate this question to you, Reader, because I think this post has pretty much run its course and I bet you get, broadly, what the Big Question is and it's a broad question anyway so that's good enough. It's not as if I have or intend to pose an answer to even the semi-big question, above, so:yes, that's it.

I'm going to try to play less Fallout Shelter. Much less, which may mean none, because without the water (haha as it were) of my attention my Shelter will wither and fall into ruin. But: oh well. It's bullsh1t, and I should play it less/not at all, and that's on me. Maybe, if I'd realized this earlier, or been able to act on it earlier, I wouldn't have troubled you with all this. But I didn't. Why not? Dunno.

Out.
Posted by slimbuttons at 10:23 AM No comments: