I've been feeling caught in the time suck of Hotel California (you will not be surprised by the link, don't...fine. welcome back). I've been feeling as if I've been doing the same thing for years, spinning through a cycle of seasons that blend. I feel this way because it is taking so long to finish Erra, of course.

It's also not THAT true.

This post is about that. Because in a series of pictures taken almost exactly one year ago, I recall that just one year ago I had that preposterous freaking beard -- in fact, I'd had it for months! And, and, just one year ago I was in the midst of mending my psyche after getting rolled by a ♀. And, just one year ago, some neighbors who were always very generous to me performed one of their most-generous-ever services: improving my face by removing that beard.
It would be disingenuous of me to be like, oh, WHAT I was thinking?! that thing looks so stupid! I mean yes: it looks stupid. But I mostly thought that throughout the period that I had it, too. I know exactly what I was thinking. (Did I explain here, ever? I can't remember -- I said it to so many people. Sorry if I did.) What I was thinking was: I am obsessed all the time (Erra). My obsession is 'captivating' in both good and bad ways. In order to be in good faith with those around me, I should wear some mark of this obsession, some aspect so that people can know--even if they do not know what I'm obsessed with--that I am a person deranged and obsessed. 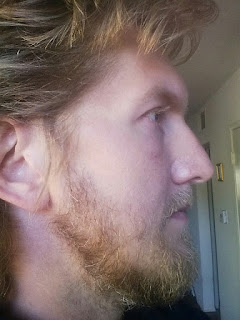 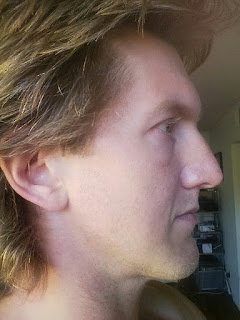 Also, I was thinking that I look dumb with a beard--it grows strange on my face--so yeah basically I'm punishing myself to get this thing done.

And what's a little...okay, "interesting" is a stretch; what for me is interesting is that these pictures of me and my idiot beard, recalling the thinking and actually having the thing on my face, help me recall more about the arc of the process with Erra. 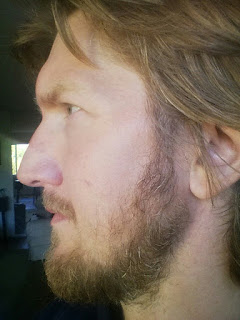 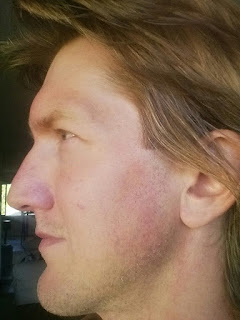 What I remember is swims. The swims of the summers of 2016 and 2015, and how they were different.

Here we are, now: 2017. I will withhold account of what my swims are/were/will be "about" this summer. Let's see!

The summer of 2016--that's the summer you're looking at pictures of now; the summer during which I had then shaved off this dumb beard--I was spending long ocean swims kind of zoning out (not like that, mom -- don't worry; very attentive to surroundings). My brain would lapse into rhythm and pace and stroke count. But, in that state, I would also kind of roll around with thoughts, considerations. And the essence of these thoughts/considerations was VERY uneasily slipping into the idea that making Erra as good as I believed and believe it could/can be is going to take way too long; that this crazy notion I'd had a few months earlier (Jan/Feb 2016), this idea of going back and reworking Column 5 just a bit, was a good idea in that Column 5 needed it, I wasn't futzing around.

But it was also a very bad idea in that...well, it is now 2017. I'm working to finish up Column 2, having taken this approach all the way back to the beginning. So, y'know: bad idea as well, clearly.

Then, if we go back another summer--to the summer of 2015--I recall different swims. In these swims, 2015, my mind was wandering in ways that seem funny to me, now.

I was trying to figure out the story.

I knew the story, but I wasn't satisfied with it. Crucial elements of the first draft that I'd written...almost two years (?!?) before that were just not clicking. NOT "in need of reworking"; I hadn't found quite the right things: events, plot widgets. Plot widgets, mostly. And I would spend these swims trying to find them: feeling a rush as I attached myself to some idea that occurred to me, even as I knew elsewhere in my mind that this idea wasn't it

I don't remember the summer of 2014 in this way, one way or another. I'm not sure how much I was swimming then. I did not have a beard. I've only ever once had a beard, during this latter part of 2015/first part of 2016 that we're temporally dancing through here. 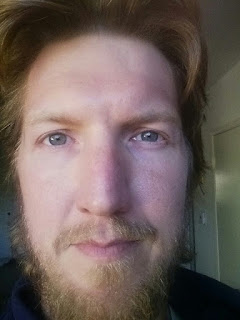 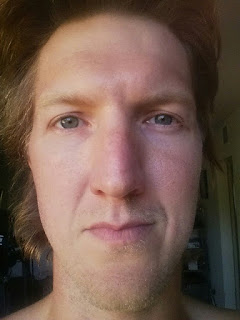 My point is, I guess, that the maddening incrementalism of most kinds of progress--at least "progress" such as I'm currently able to achieve it--might sometimes obscure ways that things are indeed changing, progressing. Perhaps improving, although honestly that seems a bit much.